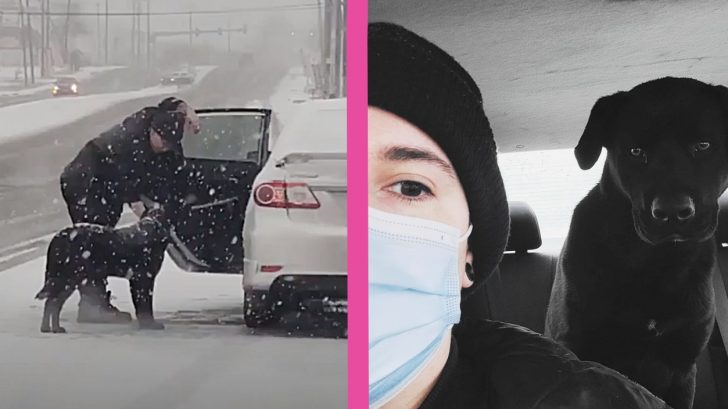 Kristin Salinas-Labrador from San Antonio, Texas is the perfect example of a true animal lover and what it means to be a good person. Footage of her surfaced on social media showing her pulled over on the side of a busy highway covered in snow and ice to save a stray dog that could have easily froze to death if left to the natural elements.

Kristin said she was out grocery shopping for her mother and on her way back home when she spotted the black labrador wandering around on the highway. The dog was cautious and didn’t want to be pet so Kristin devised a genius plan to lure him into her warm car.

Grabbing a pack of tortillas she had just bought at the grocery store, she proceeded to coax the dog with torn-off pieces of it and created a trail of tortillas that went from the icy road to the floorboard of her car. It took 30 minutes to lure him in but she was patient and the lab finally got into the backseat.

A news reporter pulling out of a nearby park happened to see what was going and pulled up behind her to film the rescue. After Kristin got the dog into the car, the reporter got out of his vehicle and walked up to her to ask her a few questions about why she stopped to help.

Kristin replied, “Dogs, they don’t know what’s going on. So, we try to help them out – one dog at a time. I’m hoping the next person will stop, too, and help the different strays,” FOX San Antonio reported.

Kristin says she has rescued several animals before in similar situations like this and has even adopted a few of them. When the reporter asked her what she’ll do with the dog, she said that she’ll hang onto him for the night and try to locate its owner in the morning.

If the owner can’t be found, she’ll work with the animal clinic to find the dog a good home. Since then, a picture and information about the dog has been posted to San Antonio, TX – Lost Dogs, Cats & Pets Facebook page in an attempt to find the owner.