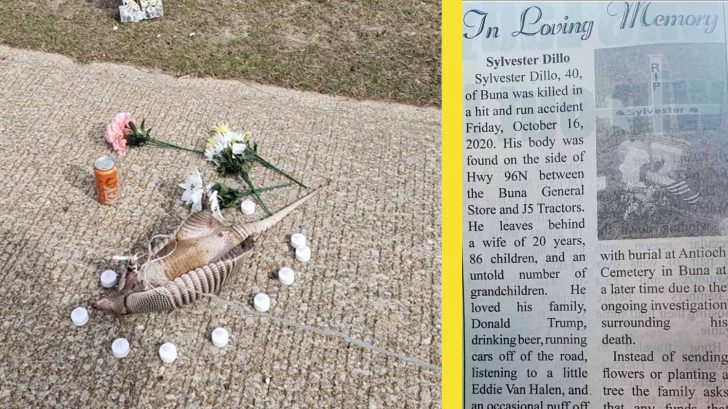 A small town in Texas is mourning the death of a local armadillo in a very unexpected way…and it’s getting a lot of attention from the media.

The armadillo, who they have posthumously named Sylvester Dillo, was tragically killed during a hit-and-run accident on a highway running through the town of Buna, Texas. After one local resident discovered Sylvester’s unfortunate end, they quickly placed a roadside memorial around him for other passersby to see.

Beyond this roadside memorial in honor of Mr. Dillo, the local newspaper also picked up the story and ran a full-on obituary to alert the townsfolk that this one specific armadillo had been killed and honored his memory with a few paragraphs.

“Sylvester Dillo, 40, of Buna was killed in a hit and run accident Friday, October 16th, 2020. His body was found on the side of Hwy 96N between the Buna General Store and J5 Tractors. He leaves behind a wife of 20 years, 86 children, and an untold number of grandchildren. He Loved his family, Donald Trump, drinking beer, running cars off of the road, listening to a little Eddie Van Halen, and an occasional puff off a black and mild. He never met a stranger, and would give you the shell off his back. A memorial service will be held for him at EE Stringer Funeral Home in Buna along with burial at Antioch Cemetery in Buna at a later time due to the ongoing investigation surrounding his death.

Instead of sending flowers or planting a tree the family asks that any funds that would have been spent be donated to Buna Independent School District for a Driver’s Education Program so that such a needless death does not happen again.”

To further honor Mr. Dillo, local fan and resident Bob Tarver created a masterpiece video montage to celebrate what possibly would have been the life of this armadillo.