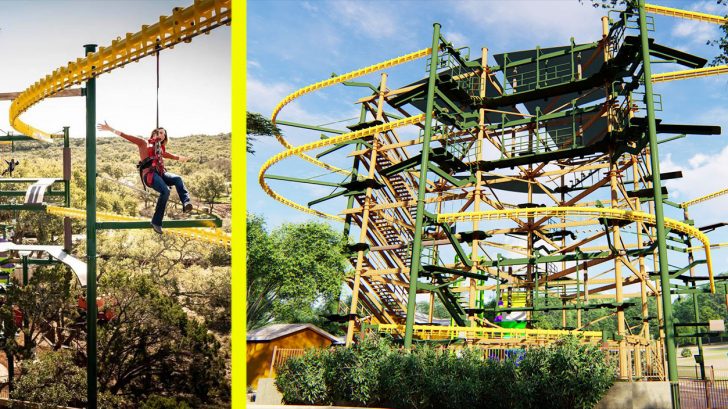 In March of 1960, four college students from San Antonio, obtained permission to explore the area that is now Natural Bridge Caverns. The students were convinced that large underground passages existed under the massive 60-foot limestone bridge. On their fourth expedition, the explorers made an amazing discovery of nearly two miles of vast underground caverns and passages.

Adventure is back at NBC! As in Adventure Tours. We are excited to reopen these exclusive wild cave tours as a VIP experience limited to one group or family up to 6 people by advance reservation only. For booking or more information, call 210-651-6101.

The landowners decided to make part of the caverns accessible to tourists from all around the world. Known as the Natural Bridge Caverns, it is one of the most popular attractions in Texas.

As the Natural Bridge Caverns gained popularity, more attractions were added on the surface, including a 60-foot high ropes course.

The course includes over 685 total feet of suspended roller-coaster track that visitors can ride just like a zip-line. The individual is able to choose between different challenges and routes while navigating to the zip rails.

We’re ready to welcome you back! The brand new Twisted Trails will be opening this Saturday! Come soar high above the hill country and test yourself on our new obstacles!

A post shared by Natural Bridge Caverns (@naturalbridgecaverns) on Jun 4, 2020 at 2:13pm PDT

Also featured is a smaller version for younger children.

Visitors can also search for gems and fossils, navigate a 5,000 square-foot maze, as well as eat and shop.

Be sure to put it on your bucket list if you visit San Antonio!

Watch the video below for a full tour of the park.