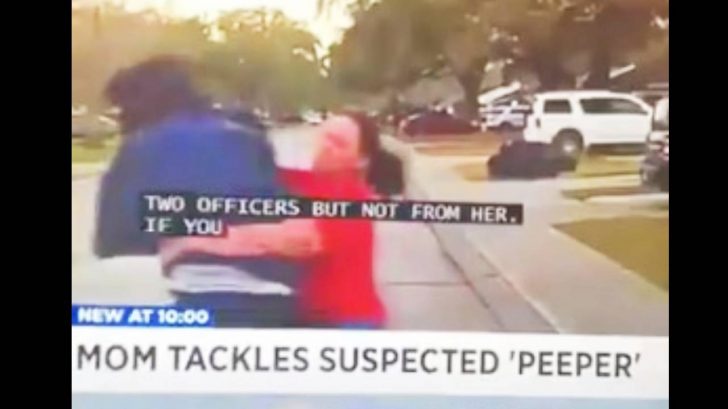 It was a normal Sunday morning in Texas. Phyllis Pena, mom to a teenage daughter, went grocery shopping early in the morning, but returned home to something every parent fears.

Around 7AM on Sunday, January 31, Pena saw a man looking into the window of her 15-year-old daughter’s bedroom. Immediately she notified police and they were on the scene pretty quickly! When the man saw Pena, he attempted to flee the scene.

The police caught the man, who turned out to be 19-year-old Zane Hawkins, but he somehow managed to get away from them. But he wouldn’t get far. Pena cut off his angle and tackled him to the ground – and it was all caught on the police officer’s dash camera.

The mother told KPRC that her “first instinct was just to make sure he didn’t go any further.”

She continued, “‘The cop fist-bumped me and he was like, ‘Hey, so I heard the Texans are looking for a new linebacker.'”

As this story began to circulate, sports fans everywhere were impressed with her tackle and weighed in on Twitter.

Moral of the story: Don’t mess with Texas moms. See the tackle in the video below.