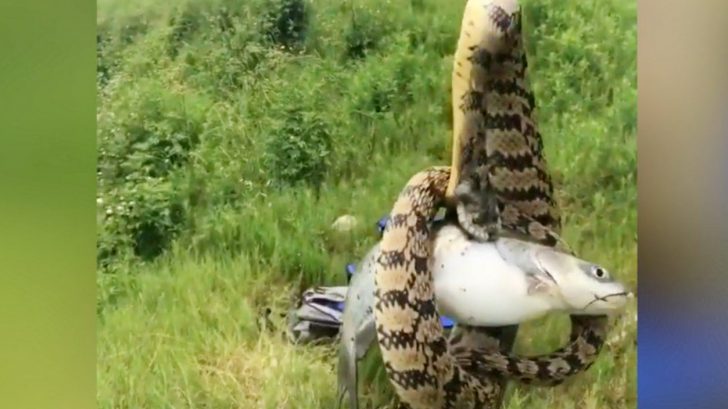 A Texas fisherman got the surprise of a lifetime after he reeled in one of his catches out of a creek in Harris County.

The man, named Chase McCray, felt a tug on his line and started reeling it in, expecting to see nothing but a fish attached to the other end. But he was shocked to discover that his catch had already been claimed by someone, or rather, something else.

As McCray brought his catch to the surface, he realized that he wasn’t the only thing hanging on to the fish. It had also been claimed by a monster snake, and it was refusing to let go!

Man reels in fish with massive snake latched onto it: A Houston fisherman didn’t realize the fish he was reeling in had already been claimed. https://t.co/WG6ki7aN05 pic.twitter.com/5GtosrEA5U

McCray shared footage of his unusual catch with ABC 7 News. He told the publication that the snake was wrapped around the fish and had its teeth sunk into its side.

Even after McCray got the snake out of the water, the serpent still refused to let go of the fish.

McCray eventually released both the snake and the fish, but made the decision to separate them first. He said it took him quite some time, but he finally managed to get the snake to let go of the fish.

“I took the knife to get the snake off the fish and released the fish,” McCray told ABC 7 News. “The snake had a few wounds from the knife, but I released it as well.”

See this is what I always fear fishing lol. They can have the whole fish and pole lol https://t.co/qIpIIcI28e

You can watch the footage from McCray’s bizzare catch by tuning in to the video below.

We’re sure that fish wasn’t the biggest one that McCray has ever caught, but he’s sure to never forget it thanks to the snake he reeled in too!