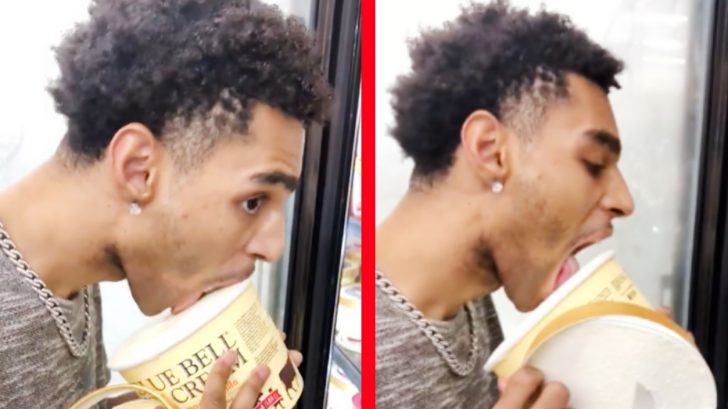 Months after a viral trend ended in a couple arrests, a Texas man is trying to bring it back.

It all started when a woman took a Blue Bell ice cream carton out of the freezer at a Lufkin, Texas Walmart. She opened the carton, licked the top of the ice cream, and put it back in the freezer.

The person filming the video egged her on, saying, “Lick it! Lick it! Oh you foul. Put it back, put it back!”

The video, which you can watch below, had people outraged.

What kinda psychopathic behavior is this?! pic.twitter.com/T8AIdGpmuS

Lufkin, Texas detectives  identified the woman thanks to security footage. The department’s intent was to arrest the woman and charge her with second-degree felony tampering, which could lead to 2-20 years in prison.

VIRAL BLUE BELL VIDEO INVESTIGATION: Our detectives are working to confirm the identity of the female suspect seen in a…

Unfortunately, this girl’s 15 minutes of fame has inspired someone at least twice her age to follow suit.

A 36-year-old man by the name of Lenise Martin III recorded himself licking Blue Bell ice cream, poking his finger in it, licking it again, and putting it back in the freezer section at Big B’s Supermarket in Louisiana.

This done gotten out of hand. Now his old ass should know better??‍♀️@ILoveBlueBell @WAFB @Kiran_WAFB pic.twitter.com/TKX0jUikok

According to CNN, local detectives found evidence that he posted the video to Facebook attempting to seek the same attention the teenage girl received.

Commander Lonny Cavalier told CNN Martin is being held for “unlawful posting of criminal activity for notoriety and publicity and criminal mischief for allegedly tampering with property.”

Martin apparently bought the carton of Blue Bell ice cream and had a receipt to prove it. Cavalier says the receipt doesn’t absolve him of the crimes he’s being charged with.

“Taking into consideration that he eventually purchased the same container is one thing. However he puts it on Facebook to gain this notoriety and at the end of the day, it gives other people ideas that are not the best interest of public health,” he said.

Because of the outrageous Internet trend, some Walmarts are not taking this lightly and are “arming” their ice cream sections.

Two months later, people – or at least one man – is still trying to go viral by licking Blue Bell ice cream at Walmart. A man from southeast Texas performed the same “prank,” licking a carton of Blue Bell ice cream after grabbing it from the freezer section, digging his finger in it as well.

The 24-year-old man in the video, who goes by Dapper Don on Facebook but whose real name is D’Adrien Anderson, claims he purchased the carton of ice cream, and provided a receipt as proof, but Blue Bell replaced all of the cartons at that Walmart just in case.

Anderson was “booked on the charge [of criminal mischief] at Jefferson County Correctional Facility Thursday night. He posted a $1,000 bond,” according to ABC 13.

See his mugshot below.

#BlueBellBanditBUSTED
Bond set for the #PortArthur man accused of licking a gallon of @ILoveBlueBell ice cream, putting it back in the freezer in a Facebook video. Police announced Thursday an arrest warrant has been issued for D'Adrien Anderson, 24. https://t.co/okUDYzFTpa pic.twitter.com/PWUGvJ27Gf

Jefferson County District Attorney Bob Wortham told KFDM/Fox 4 News that the store lost money because they had to replace the ice cream.

“This guy loves publicity even if it’s for the wrong reason,” Wortham said. “That can lead to bigger and worse things. If we’re going to save this guy, we have to do it with this case or he’s over the hill.”

BREAKING: The accused “blue bell licker” 24-year-old D’Adrien ‘Dapper Don’ Anderson has been released from jail on a $1,000 bond. Why he says he now regrets licking the carton of ice cream at 12pm @12NewsNow pic.twitter.com/SODnsKHRCb