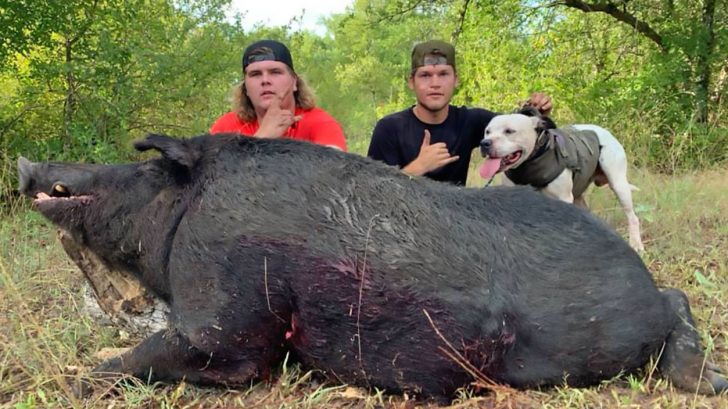 Most everyone has heard the saying, “Everything’s bigger in Texas.” Two young men at the age of 17 and 20 years old took down the biggest wild hog of their lives while hunting in Texas on July 29, 2020.

Nathan Wright and Colton Roberts are both friends and hunting buddies who were hunting wild hogs near Proctor, Texas which is about two hours southwest of Dallas. Of the three wild hogs they killed that morning, one of them tipped the scales at 460 pounds.

According to Wright, a farmer down the road from their house called them, saying hogs were eating his crops, messing with his cows, and causing a lot of damage. This is a major problem all throughout Texas. The Ecology and Management of Wild Pigs state on their website that there are an estimated 2.6 million feral hogs in Texas. They can breed as early as six months of age and since they are distributed throughout the entire state, they cause billions of dollars in crop and field damage each year. Wild hogs are an unprotected, exotic, non-game animal. They can be hunted, without limits and with no hunting permits necessary, with landowner permission any day of the year.

Their chosen method, was to use dogs to chase and attack the feral hogs and then, with the animal cornered, dispatch it with a knife.

“It might have been the biggest hog we’ve been upon. But never expected to catch one that big.”

Both Wright and Roberts said that hunting is in their bloodline, and they’ve both been hunting for most of their lives. They plan to donate the meat to a family in need.

Click on the video below to watch the news interview with Wright and Roberts.