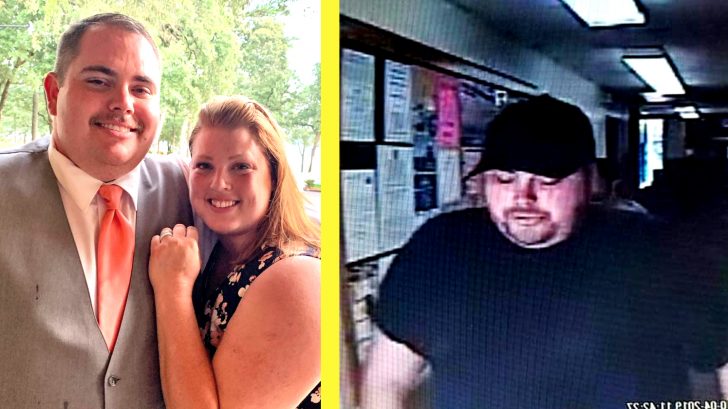 A Texas groom ruined his wedding day by robbing a local bank just one day before he was set to tie the knot with his beloved fiancee.

According to the Trinity County Sheriff’s Office in a Facebook post – a man robbed Citizens State Bank in Groveton, Texas on Friday, October 4th, 2019 just before noon local time.

The man allegedly told bank tellers that he had a gun on him and said that he needed the money to pay for his wedding the very next day.

“He basically stated that he was getting married tomorrow so he didn’t have enough money for a wedding ring that he wanted to buy and he needed to pay for the wedding venue,” Sheriff Woody Wallace said.

He made out with less than $10,000 and peeled out of the Groveton bank parking lot before heading down a service road and throwing some of the clothes he was wearing out of the car.

Not much long after, and the Sheriff’s office posted the photos from the bank’s security footage on social media – and what would ya know? This man’s fiancee was scrolling through her feed and recognized him!

The man, now identified as Heath Bumpous, was recognized by his fiancee, Dione Traylor, who works for the local fire department as a paramedic. Bumpous was also a former EMS employee.

Traylor, his fiancee, was able to reach out to him via text and ask him if he had just robbed a bank. Eventually, she was able to convince him to turn himself in to authorities and he was in custody by that evening.

“His picture was all on Facebook. He needed to turn himself in,” the sheriff added.

“He is now in custody. He has been charged with aggravated robbery. The district attorney has accepted the charges. It will go to a grand jury and he will be prosecuted to the full extent of the law,” Wallace said.

According to the Sheriff, Bumpous drove straight from the bank to the venue where he paid for his wedding costs.

Heath Edward Bumpous is in custody on an Robbery charge. Sheriff Wallace will go live in a few minutes with a full update on the bank robbery.

Most of the money stolen has been recovered. It is unknown if the couple still plans to marry. Needless to say, the wedding did not happen over the weekend.

Watch the sheriff’s full video below.