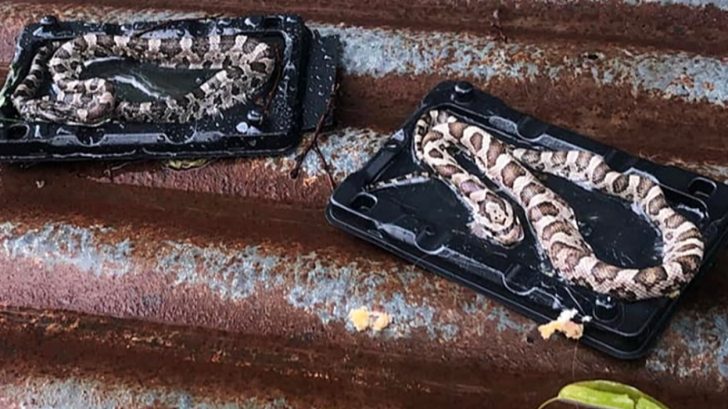 One Texas family got a terrifying surprise when they discovered their mouse trap had invited some unwelcome guests instead.

Danny Brown of Greenville, Texas and his wife, Mary Jane had set up sticky traps around their house to catch a little mouse. But when they checked the traps out they instead found some angry snakes stuck in the glue. While the find was unexpected, it brought fear into the household.

Brown posted on Facebook sharing a photo of the snakes.

“Now it’s really getting scary. That’s an indication that a snake nest might be close by or even in our house.”

Even scarier, Brown had shared a video of one of the trapped snakes successfully using a sheet of paper to try and separate itself from the glue it was engulfed in, according to The Charlotte Observer.

Now, the Brown family lives in fear that there are more snakes nearby – concerned they will pop up in their home when they least expect it.

While Brown originally thought the snakes were copperheads, people across social media are claiming they are “harmless rat snakes.” Either way, Brown and his wife aren’t happy about their new guests!

In the meantime, their only solution is to keep the sticky traps out around the house in hopes to catch any slithery friends who make their way inside. Yikes!