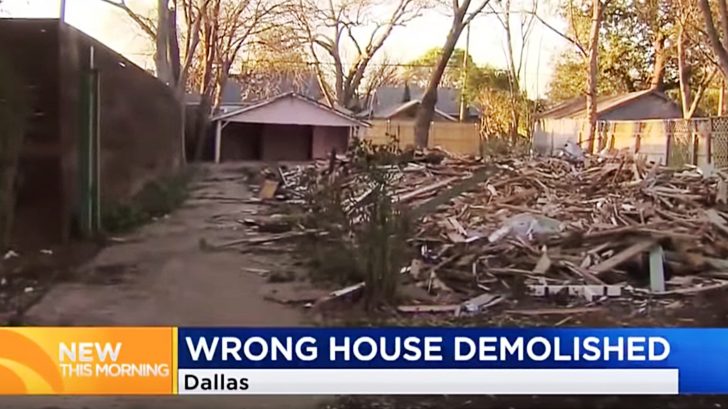 A historic 1920s home known throughout the neighborhood as “The Pink House” has been reduced to absolutely nothing after a crew mistakenly demolished it instead of the house that was scheduled to be torn down.

This Dallas area home at 5532 Richard Avenue was torn down on Wednesday, February 19th, 2020 in a mix-up by the demolition company. Apparently, the address they were supposed to be working on was down the road several blocks.

This home, sitting vacant, was stripped of plumbing and electrical and had no gas meter- according to the owner of the demolition company. He also says that the curb address was covered up by water and debris – all leading to the mix-up.

Above, you’ll see what “The Pink House” looked like prior to being bulldozed by JR’s Demolition. The property is owned by a former Dallas resident who now lives in California and inherited the property several years ago.

“I was pulling up just as the bulldozer and wrecking crew was getting out of here,” one neighbor told CBS DFW. “Didn’t think much of it just thought another permanent demolition in the neighborhood.”

The owner of the demolition company took full responsibility for the mistake and issued a statement to the news station explaining their position.

“JR’s Demolition is a small family business who has been in the demolition business for 15 years. I as the owner, have been in demolition over 35 years, and after 50,000 plus structure demolitions, this is the first incident wherein the wrong structure was demolished.

“We made a mistake and thought we had the right property. Many homes on Richard street have been demolished by JR’s and other demolition companies in connection with the current redevelopment and revitalization of this area. Unfortunately, this home did not have any house numbers on it and any street curb address was covered by water and debris from the recent heavy rain events. Nonetheless, JR’s inspected this property ensuring that it was empty. The house was stripped of all plumbing and electrical. It lacked a foundation without concrete, and the gas meter was gone. The rear door was boarded up and lacked a non-operational front door. The front yard was covered with cut trees debris just as any demo house is before demolition. Neighboring workers stated the property had vagrants and has been vacant since October last year. In short, the property was similar in appearance and condition to many of the properties that JR’s demolished on Richard Street.”

We spoke with the new owner of the property who acquired it in 2019 and will be working with him toward a resolution.”

The owner of the home, Jeffery Wenninger says he isn’t seeking to get another house – this particular house had a great deal of sentimental value to him and he hopes that the resolution takes that into consideration.

This is not the first time a house in Dallas has been mistakenly bulldozed…back in May 2016, another demolition company tore down a duplex by mistake. This company had the right house number, but the wrong street.

Watch the full news report about this wrong-house demolition below.