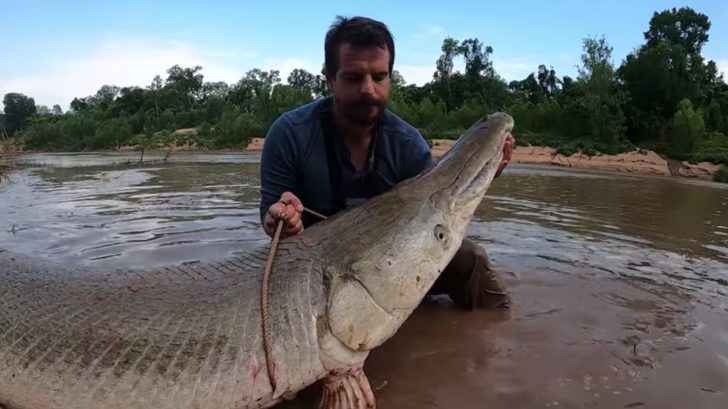 Fisherman and YouTuber, Payton Moore, runs the channel WILD LIFE and he just dropped a brand new video showing a massive 300-pound fish that he caught out of a Houston, Texas river.

“It’s like walking a T-Rex,” he says in his YouTube video.“Every time I think I’m going to muscle him up, he muscles me back down.”

Video footage showed the massive alligator gar and angler fighting back and forth in a tug-a-war battle until the fish was worn out and Payton was able to reel the animal to the shoreline.

An “absolute dinosaur,” the angler says.

The fish flipped its tail around in one last attempt to get away but failed and the fisherman lassoed a rope over the animal’s head so that he could better pull it out of the water.

Once he got the beast mostly out of the water, he took his measuring tape and measured the length which came out to be eight feet, two inches, which is three inches short of the current state record.

He didn’t have a way to measure the fish’s weight before releasing it, however, he estimated the alligator gar to be about 300 pounds.

Looking at this alligator gar, Payton figured that it was most likely over 50 years old and got a bit emotional over catching and releasing the majestic beast.

“This is by far the most amazing catch of my entire life and it’s not even close,” Payton said in the YouTube video. “I could fish for the rest of my life and never see one like that again.”

According to the Texas Parks and Wildlife Department, the alligator gar are an old species that existed at the same time as dinosaurs, and as scary as they look, there has never been a report of one attacking and injuring a human.

Watch Footage Of The 300-Pound Fish Below