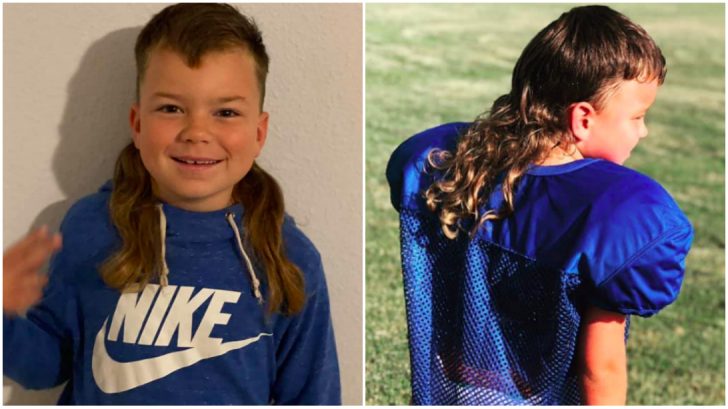 Jaxson “Hot Rod” Crossland, an 8-year-old from Farmersville, Texas, recently won a title that is sure to make every country boy proud….”Best Mullet In America.”

The contest, sponsored by the USA Mullet Championships, has both an adult and kids division and highlights the best mullets in the country. Crossland dominated the kids’ division by beating out 120 other contestants and winning by more than 2000 votes.

What kind of perks come with winning a mullet championship? Jaxson won $500, mullet shampoo, and a fan club, according to the champ.

“I got a thousand girls,” Jaxson said after his win.

Jaxson’s mom, Zoie, said that her son’s now-famous hair style came about somewhat accidentally. As a baby, Jaxson had a head full of curls…until his dad cut them off.

“And I got in a little trouble for that one,” Jaxson’s dad Trent said. “After that, I didn’t want any curls gone,” Zoie said.

So, Jaxson’s future haircuts only consisted of a trim in the front, and per his mom’s request, the curls remained untouched in the back.

Jaxson’s outgoing personality matches his impressive mullet, and his parents say that it’s become a “reflection of who he is.”

“I think the first thing people see is his hair, but at the end of the day it shows how outgoing he is,” Zoie said. “He wants to turn any bad situation into a good situation,” Trent added. “He’ll see me off on the phone or trying to figure something out frustrated and he’ll be like, ‘well, daddy, you just have to remember, everything’s going to be alright.’”