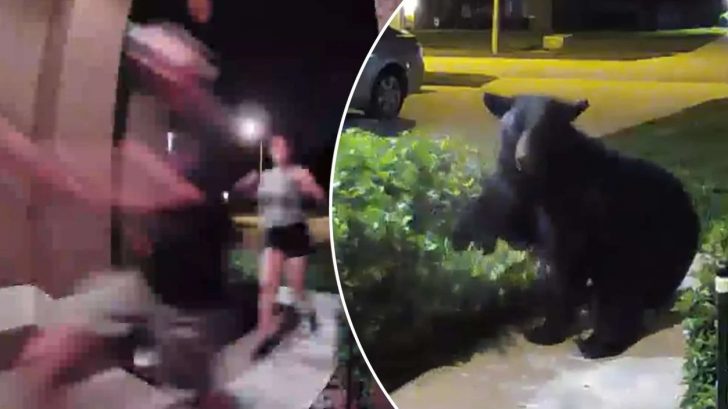 Another angry black bear chased a family and their dogs back into their home, in Apopka, Florida. The scary encounter was captured on their home security camera.

The terrifying footage shows the couple running back into the home with the man screaming at the top of his lungs trying to get his pet, Lexi, to follow them.

The couple said they were just letting their dog out to potty like they do every night when the incident took place.

“We were letting the dog out to potty and a bear charged us from our next-door neighbor’s house,” the woman who lives there with her husband told Daily Mail. “We made it safely into the house, and closed and banged on the front door.”

Fortunately, for this couple, they got away with no injuries to themselves or their pet. However, we’re sure they will be extremely cautious now when letting the dog out to potty.

Watch The Scary Bear Encounter Below

The Apopka Police Department said they were not aware of the incident and have not been contacted by anyone about it either. What’s crazy is a very similar situation happened in Apopka a month before in March during the day to another couple.

David Bass shared his home security footage showing him and his wife walking out of their home to get into the car and leave when they were chased back inside by a black bear charging at them.

The Florida Fish and Wildlife Conservation Commission (FWC) said there has been several bear sightings around Central Florida in the weeks before these events.

The FWC gets up to 6,000 bear-related calls each year, however, only 15 incidents of people suffering moderate-to-serious injuries have been reported in the past 50 years.