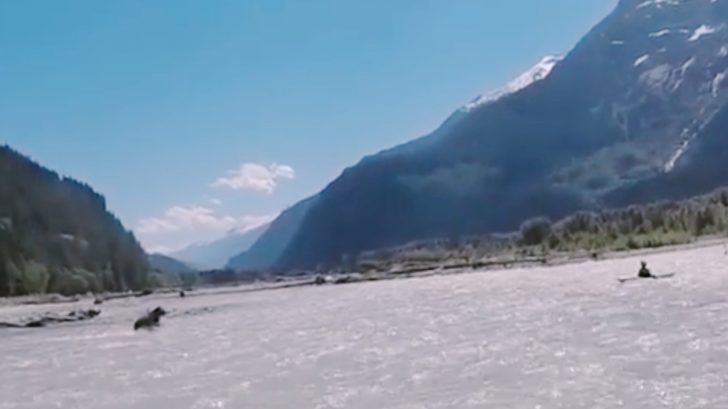 Video footage shot on the Elaho River near Squamish, British Columbia, Canada shows the intense moment a grizzly bear charged into the water to swim after a kayaker at what looked like an attempted attack on the human.

The video was filmed by Corey Boux who was wearing a GoPro at the time and riding in a raft full of people who were on a guided raft tour down the rapidly flowing river.

Note that the GoPro camera distorts the view, making it appear like the bear is further away than it actually is. However, you can see as the video starts, the small grizzly bear running as fast as it could on the shore and making a big splash as it jumped into the river.

People on Corey’s raft were screaming at the kayaker ahead of them, who was leading the group, to warn him about the bear that was quickly closing the distance between it and the outdoorsman.

The bear actually got within a few feet of the man before he realized what was going on and started aggressively peddling downstream to get away from the animal.

Fortunately, the man was able to safely get away from the grizzly bear and the animal stopped its pursuit and just swam to the other side of the river.

No one was reported injured during the incident but it was all captured on video and certainly a terrifying moment for the kayaker and the onlookers watching from the raft.

Corey shared the video on his Instagram on July 13, 2018, and since then it has received thousands of views and a lot of comments from concerned followers.

“Cute in some way!” another wrote. “The bear most def wanted to join in on the fun!”

Another commenter said, “As long as the kayaker stays upright in his boat, he can easily outrun a swimming bear. I’m not so sure about paddlers in a raft.”

It’s not clear if the kayaker or if the people in the raft had bear spray on them but if they didn’t, we can imagine they’ll take some with them next time they go into bear country.