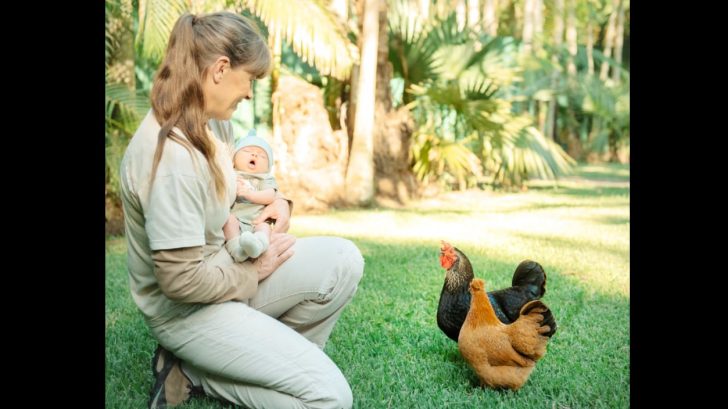 Bindi Irwin and her husband Chandler Powell welcomed their first child, a daughter, on March 25. She was born on their one-year wedding anniversary.

They named their baby girl Grace Warrior Irwin Powell, with her two middle names being in honor of Bindi’s late father, Steve Irwin.

“Her middle names, Warrior Irwin, are a tribute to my dad and his legacy as the most incredible Wildlife Warrior,” Bindi said.

The Irwin family lives on Australia Zoo property, so Grace will grow up alongside some extraordinary animals. Though it may be a while before she’ll be seen feeding crocodiles in the “Crocoseum” like the rest of her family members!

But it was Terri who introduced her granddaughter to some of the first animals she has met at Australia Zoo.

Terri shared a photo of her kneeling on the ground while cradling Grace in her arms. While Grace seemed to either be asleep or yawning (she had her eyes closed), Terri had a big smile on her face.

The new grandma was looking ahead at a pair of chickens in the grass. “Introducing Grace to some of the animals living in her backyard,” Terri said before tagging Australia Zoo.

Introducing Grace to some of the animals living in her backyard @AustraliaZoo. pic.twitter.com/kdlnjibZHJ

Before she gave birth, Bindi told The Bump Grace will call Terri “bunny” instead of grandma or grandmother.

“We spent a long time searching for grandma names that also had an animal link,” Bindi said. “We decided that she’s going to be called ‘Bunny.‘”

That seems like an appropriate grandma name for Terri! We’re sure she can’t wait to introduce Grace to more animals as she grows older.