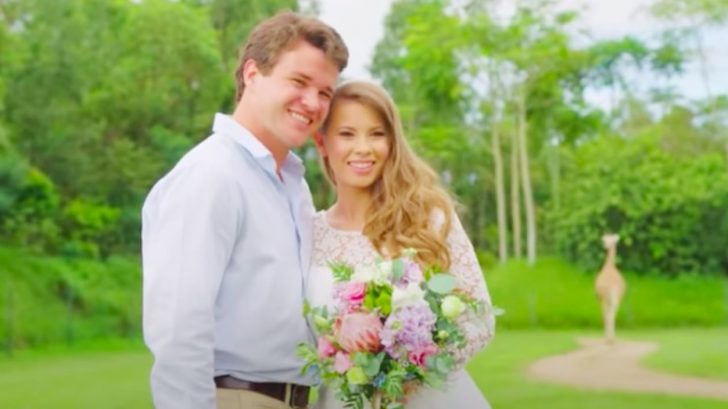 Bindi Irwin and Chandler Powell originally planned to get married in April 2020 in front of their dearest friends and family members. But when the world environment drastically changed just weeks before their original wedding date, the couple had to improvise.

Instead of having the larger wedding they originally planned for, Bindi and Chandler opted to have a more intimate ceremony at the Australia Zoo. The only guests in attendance were Bindi’s mother, Terri, her brother, Robert, and her late father Steve’s best friend, Wes Mannion.

Bindi and Chandler also moved their wedding up to March 25. They shared the news on social media not long after the ceremony.

“There are no words to describe the amount of love and light in my heart right now,” Bindi wrote alongside a photo of her and Chandler sharing their first kiss as husband and wife.

Just a few months after they said “I do,” Bindi and Chandler announced they were expecting their first child. They later found out they’re expecting a baby girl.

Bindi and Chandler are waiting until their daughter arrives to decide on her name. In the meantime, they’ve been calling her their Baby Wildlife Warrior.

Now, as the couple celebrates their first anniversary, they’re also anxiously awaiting their daughter’s arrival. Bindi is due within the week!

While neither Bindi or Chandler have posted about their anniversary on social media as of press time, Bindi’s mother, Terri, shared a message for the couple on Twitter.

“Happy first anniversary @BindiIrwin and @chandlerpowell9!” Terri wrote. “I can’t wait for the next amazing chapter in your lives!“

You can read Terri’s anniversary wishes for her daughter and son-in-law below.

Happy first anniversary @BindiIrwin and @chandlerpowell9! I can’t wait for the next amazing chapter in your lives! pic.twitter.com/9KuWpfVU9T

Bindi and Chandler’s wedding may not have gone according to plan, but it ended up being a beautiful day. The ceremony was filmed for TV, and they captured some stunning footage.

Tune in to the video below to relive Bindi and Chandler’s special day.

We wish these two lovebirds many years of happiness together. We’re so excited for them and their growing family!