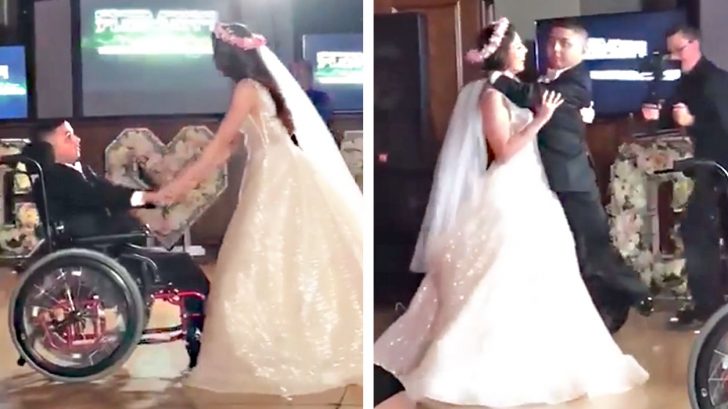 It was a moment they’ll both never forget. As a young bride got her wish of marrying her dream man, her little brother got to live out his wish too.

Cesiah Aviles-Nieto’s brother, Alex was diagnosed with a rare disease called A-T when he was just 18 months old. Not long after, the doctors found that he had leukemia at age three. Cesiah told Inside Edition,

“They told my mom that he had a ten percent chance of living.”

Through life’s unexpected hardships, the siblings got by with their close relationship.

In 2017, Cesiah got engaged to her now-husband Moises. After learning of the engagement, Alex told his sister he was determined to dance at her wedding. As Alex couldn’t walk by himself, he was taking on the ultimate challenge to honor his sister. After lots of practice, 17-year-old Alex was ready to shine by his sister’s side.

When the big day came along, the excited bride forgot all the steps.

“I forgot everything. I blacked out. So I was like you know what, I’m just gonna carry him. So I carried him.”

The beautiful video shows the bride in a gorgeous white gown and a pink-floral headpiece grabbing her brother out of his wheelchair on the dance floor. As the two began to dance to Rascal Flatts‘ “My Wish” they share the most special moment of the night together. The song had a very personal meaning from Alex himself.

“He was telling me that he wanted me to be happy. That was his wish for the rest of my life, with Moises by my side.”

Cesiah with a full heart admitted that this is something her and her brother will both remember for the rest of their lives.

Watch this heart-warming video of this brother-sister duo’s wedding dance together below.