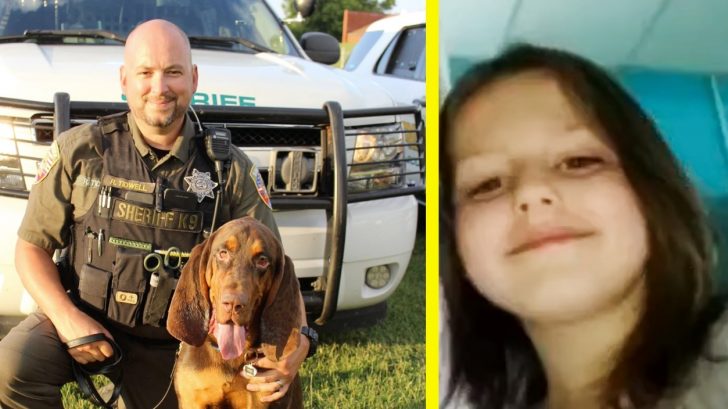 Missing for months, a six-year-old girl has finally been found with the help of a local bloodhound named Fred.

The young girl was believed to have been abducted by her father in late May 2021.

The DeKalb County Sheriff’s Office told WSMV that they used a variety of resources and tactics to locate her including drones with thermal imaging cameras.

After identifying a heat signature on part of the property where they believed she was being held, the investigators called for trusty K9 Fred to help confirm their suspicions.

Fred, and all bloodhounds, are known for their incredible noses and the ability to detect even the slightest trace of an odor they have been trained to locate. In Fred’s case, he was given an item known to belong to the girl’s father so that he could begin the search.

As officers followed Fred, he brought them down a small footpath from a home in the Pea Ridge community where the suspect was thought to have taken the girl. Eventually, he sniffed the door to an outbuilding and sat down – this is the indicator he has found something.

“We made entry into the building and discovered the suspect and child in the back of the shed behind blankets that were hanging from a makeshift clothesline,” Rutherford County Sheriff’s Sgt. James Holloway said in a statement.

Deputies noticed that the outbuilding had been barricaded inside with various reinforcements blocking the door and covering up the windows.

“The door to the outbuilding was barricaded, and the windows had been covered up with metal. There was no ventilation and air conditioning inside the small outbuilding. There was barely any food or water for the child. The outbuilding had a strong ammonia smell where the two had been urinating and defecating in a five-gallon bucket,” Sheriff Patrick Ray said.

After police took the girl’s father into custody and made sure she was checked out by EMS staff, Fred’s handler, Deputy Richard Tidwell said that she was asking to meet the dog that saved her.

“The little girl’s asking to meet the dog that saved her. He gave her licks. She gave him a big old hug,” he said.” His reward for a successful find is his chicken. He loves chicken. If you say chicken he’s going to perk right up.”

“I praised him and loved on him. I pulled the chicken reward out of my pocket. He ate the chicken and wanted to meet other people as if to say, ‘Look what I’ve done.’”

The young girl was turned over to the Tennessee Dept. of Children’s Services and the father was arrested and charged with child abuse, custodial interference, and failure to appear for a court date. He is currently being held on bond.

Watch the full news report from WSMV below.