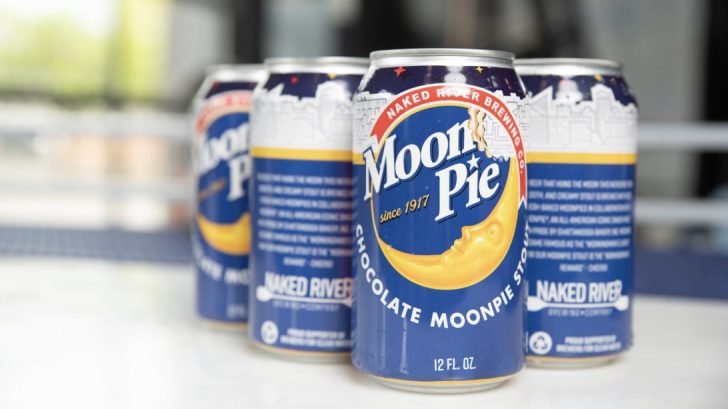 What will they think of next? A Chattanooga, Tennessee, brewery has pulled out all the stops and taken one of the south’s most iconic childhood treats and turned it into an adult beverage.

In 1917, a Kentucky coal miner asked a traveling salesman for a snack “as big as the moon.” The salesman obliged and returned later with the first Moon Pie, a chocolate covered marshmallow snack layered with flaky graham crackers. The rest is history! We doubt either of those men ever predicted that the snack would become beloved world-wide, or that the treat would eventually be transformed into a beer.

The “beer that hung the moon” was created by the brilliant minds at Naked River Brewing Company and is made with 100% fresh-baked Moon Pies from Chattanooga’s own Moon Pie factory. “MoonPie became famous as the ‘Workingman’s Lunch,’ Now our MoonPie Stout is the ‘Workingman’s Reward,'” the website reads.

If your love for Moon Pies run deep, you can drop by the Brewery for Moon Pie Mondays. Guests can not only enjoy a Moon Pie stout, but they can pair it with a perfectly deep fried Moon Pie.

It’s Moonpie Monday at Naked River! We open at 4pm today, so swing in for a $4 Moonpie Stout (draft only) and $2 deep fried Moonpies! ? Also keep an eye out for our monthly newsletter going out this afternoon!

Posted by The Naked River Brewing Company on Monday, June 3, 2019

If you’d like to get your hands on some Moon Pie stout, you might just have to make your way to Chattanooga. But, we’re pretty darn sure the trip would be worth it. While you’re there, stop by the Moon Pie General Store and Bakery. Get a behind-the-scenes look at the factory in the video below.