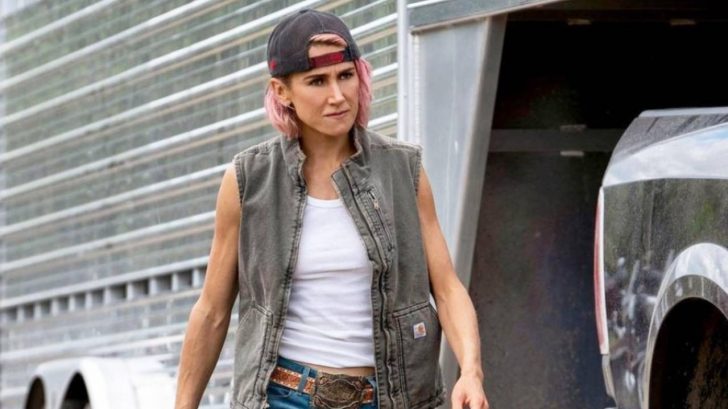 During Yellowstone‘s eventful episode 6, which aired on December 5th, a brawl in the bunkhouse got all the women fired. If you remember, Lloyd and Walker had been butting heads for weeks. They fought in a previous episode, and Rip came in the end the fight, sending Lloyd flying over the kitchen table.

Everyone thought things were resolved but the next episode, things came to a head when Lloyd grabbed Walker’s guitar, smashed it, and then stabbed him in the chest.

Ranch hands Ryan and Colby wrestle with Lloyd and put him in a sleeper hold, while Mia packed her stuff and walked out, telling Laramie, “F&*% this place,” as Walker is on the floor bleeding.

A vet is onsite and gets called to tend to Walker’s stab wound. Luckily, it didn’t hit his lungs but when the vet tries to take it out he thinks it hit a bone. Wanting to double check the x-ray, the vet pauses but Walker screams for someone to pull it out. Laramie yanks it out for them.

Later, John tells Rip that Lloyd and Walker have one chance to squash their beef and Rip has to “make an example” of whoever is the last man standing. He also told Rip to get rid of all the women in the bunkhouse, including Teeter (nooooo!). Rip tried to save Teeter, saying she’s a good ranch hand and never started any drama, but John doubled down and said “no women at all.”

The next morning, Rip fires Laramie and Teeter, who gives Laramie a mean look, seeing as this was all her fault.

For the rest of the episode, we didn’t know if we’d ever see Teeter again.

During Episode 7, she shows back up at the ranch, dressed very nicely, and asks to have a word with John and Rip. She asks for her job back and explained that she was always the first person up and the last to stop working.

We're here for Teeter fighting for her job. #YellowstoneTV pic.twitter.com/6THSe3Jwiz

After hearing her plea her case, and after she flashes the Yellowstone brand on her chest, he changes his mind. John was unaware that Teeter had been branded.

Rip assures her that the brand “means something” and to put her things back in the bunkhouse.

Teeter then hugs Rip, showing us that The Yellowstone Ranch is more than just a job to her. Over the past two seasons, fans have fallen in love with Teeter and the actress who plays her, Jennifer Landon.

So many fans commented on many different posts about the show expressing their support for Teeter and her unjust firing, as well as being ecstatic that she had returned! Landon, who is the youngest daughter of Bonanza and Little House on the Prairie legend Michael Landon, saw a lot of those comments and took the Instagram to express her gratitude.

“I just want to take a moment to say how truly overwhelmed I am by the love and support shown for Teeter this week,” she wrote alongside of Teeter hugging Rip. “She means the world to me and it’s an honor to get to play her. I’m beyond thankful for everything @yellowstone has brought into my life, and to the @yellowstone fans for being the best fan base, of any show, ever. We can’t do what we do without you.”