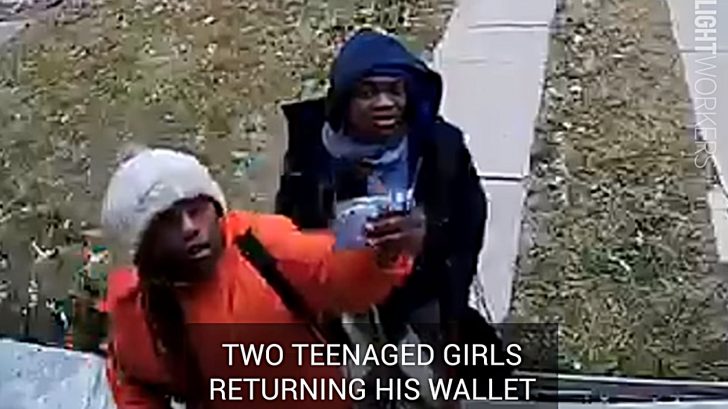 Self-employed veteran Marc Walsh from Detroit, Michigan had an emotional moment after losing his wallet and then having it returned to him by two honorable teenagers.

Marc said he had just gotten back from the grocery store when he noticed his wallet was missing. Panicked and searching everywhere for it, it was nowhere to be found. There was nothing he could about it, so he decided not to call the police and just took it as a loss. However, this hit him hard because he has to hustle for every dollar he gets and doesn’t make much money.

“I was really distraught. I’m self-employed and I don’t make a ton of money. So having cash in there that I needed and not having it, I was pretty torn up about it,” Marc told Light Workers.

Fortunately for him, two 14-year-old twin sisters Makyla and Mahkia Vincent were walking to school when they noticed the wallet laying on the ground. They picked it up and saw there was a military ID card and over $200 inside it. Instead of taking the money, after school, they walked to the address on the ID card and knocked on the door.

Security camera footage shows the girls knocking and holding up the wallet to the camera to show the veteran what they had. Surprised and grateful to see his wallet again, Marc gave the girls some money for their good deed. They told him that if their grandpa, who is also a veteran, lost his wallet they would want someone to return it to him.

“Basically, you just have to make the right decision. We knew we had to return to the wallet to the rightful person,” the sisters said.

The girls continued their journey home but Marc didn’t want their kindness to go unnoticed. He contacted a local news station and told them the story of what happened and they sent a reporter to interview both him and the girls.

Watch The Interview Below Of The Veteran & Good Teenagers