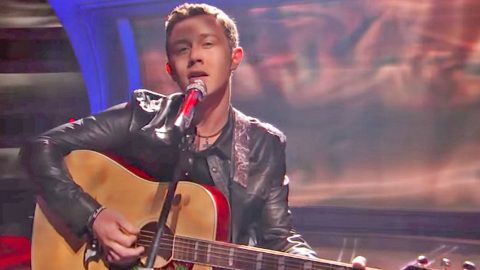 The young vocalist earned his “Golden Ticket” to Hollywood following his pure country renditions of Josh Turner‘s “Your Man” followed by Travis Tritt‘s “Put Some Drive in Your Country” at his audition, going on to dominate the competition through a series of country covers.

In one of his final performances on Idol, McCreery performed a moving rendition of Alan Jackson‘s “Where Were You (When the World Stopped Turning)” in memory of that infamous day in September 2001.

At the young age of 17, McCreery masterfully matched Jackson’s deep southern vocals throughout his moving performance. Armed with his acoustic guitar, the singer poured his heart and soul into the delivery of the powerful country ballad.

“Where Were You (When the World Stopped Turning)” was written and recorded by Jackson following the attacks on the World Trade Center on Sept.11, 2001. The depth of the song earned Jackson his first Grammy for “Best Country Song” in addition to multiple awards at both the ACMs as well as the CMA Awards.

McCreery was named the Season 10 champion of American Idol ahead of fellow country singer Lauren Alaina, the pair making history as the youngest contestants facing off in the finale. Additionally, McCreery became the youngest male winner of the show and the second youngest overall.

You can listen to McCreery’s rendition of “Where Were You (When The World Stopped Turning)” below.