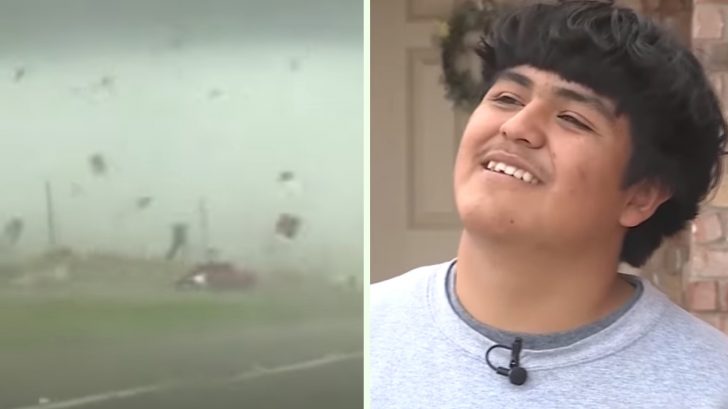 Riley Leon from Elgin, Texas just received a brand new 2022 Red Chevy Silverado after going viral on social media for surviving the eye of a tornado.

The shocking footage filmed by storm chaser Brian Emfinger showed a tornado shredding through houses and powerlines as it centered itself in the middle of Highway 290 in Elgin.

16-year-old Riley was driving down the road in his red pickup truck when the tornado picked his truck up and threw it on its side, spun it in circles, and landed it back on all four tires.

The teenager simply drove off as if nothing happened, however, it was all caught on film and quickly went viral when it hit the internet.

“On the video, it looks like I drove off but in reality I didn’t,” Riley told NBC 5 on Wednesday. “I landed in the center of the road and I was just driving to get off the road.”

The video caught so much attention that Bruce Lowrie Chevy in Fort Worth decided to reach out to Riley and offer him a brand new Chevy truck.

Bruce Lowrie Chevy announced Thursday that they felt bad for the boy who miraculously made it through the eye of the tornado and wanted to help him out by replacing his damaged truck.

Riley was very grateful to get the truck, adding that it came in at the perfect time to start his new job at Whataburger.

The teen said when the tornado hit him, he was actually driving back home from his Whataburger job interview, and the company later confirmed that he was hired, especially after they saw how well he handled the encounter with the tornado.

Riley said, “I honestly didn’t know what to do, to grab onto the steering wheel or to start praying,” adding that the twister hit “out of nowhere” and he’s “blessed to live another day.”

Footage Below Of Riley Encountering The Tornado