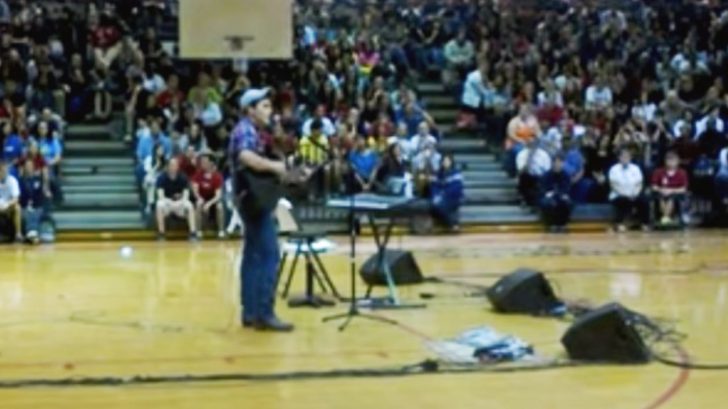 Nothing beats a good country love song, and Brantley Gilbert has recorded one of the best. Released in 2010 as a track off of his album, Halfway to Heaven, “Fall Into Me” is still making country gals swoon.

Although “Fall Into Me” was never released as a single, it quickly caught on and became a fan-favorite.

Now, it’s one of Gilbert’s better-known songs, and many aspiring singers have since covered it.

One of those singers was Cody Taylor, who performed “Fall Into Me” during his high school’s talent show in 2012.

In the description for his official YouTube channel, Taylor writes that he has only been singing and playing guitar since the beginning of his high school years.

But that’s something you never would have guessed based on his performance of “Fall Into Me.”

All eyes were focused on Taylor as he sang, showing off his pure country voice.

It’s hard to believe that he was a newbie to singing at the time, because he sang like an artist who’s already been in the business for years.

As you would expect, Taylor ended up stealing the show that day, and took home second place in the competition. He put his singing skills on display yet again the following year, when he sang Thomas Rhett‘s “Something to Do With My Hands.”

Once again, Taylor took home second place for his performance.

But it’s his version of “Fall Into Me” that we love the most, and once you watch it below, you’ll see why.

If Taylor wants to make it in country music, we’d say he has a fine future ahead of him!