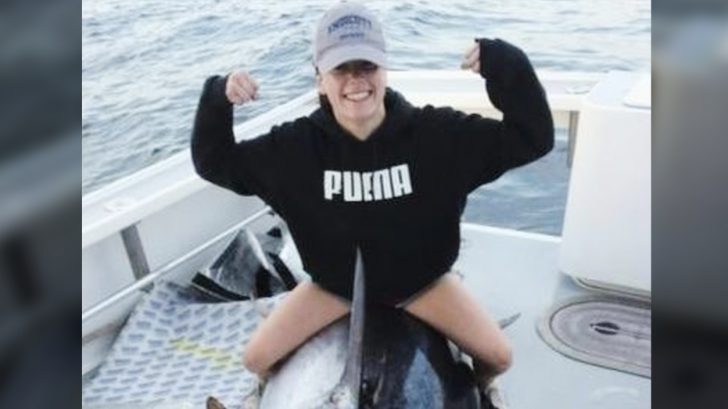 Fishing runs in her blood – and it shows.

18-year-old Devin Zelck’s father, Steve Zelck, is a commercial fisherman which means that Devin grew up around fishing.

It’s likely she made her very first catch when she was a little girl, much like the ones below.

On Friday, Devin and Steve were out fishing when a bluefin tuna, Devin’s first, took the bait. This was extremely exciting for Devin because she’d been in a competition with her brother to see who would catch a bluefin tuna first!

“My dad caught his first tuna at 13, so it’s kind of been a competition between me and my brother,” she told Boston25 News.

Devin began reeling in the bluefin, which proved to be a difficult task. After 45 minutes, she began to cramp up, so Steve took over. 45 minutes later he cramped up as well and they switch again. They continued to switch places every 45 minutes for 10 hours.

The massive fish finally gave up the fight, which took Devin and Steve eight miles away from their anchor! Once they pulled the tuna onto their boat, they realized just how big it was.

“I was shocked! It was huge,” she said. “We saw it come up onto the surface and we were like, ‘oh my goodness.'”

Their tuna weighed in at 700 pounds!

“It was just so exciting,” Devin said of the experience. “Like, you have to be there, like you have to catch it yourself to know how exciting it is.”

Steve is one proud dad after that massive catch, saying, “She was just instrumental in the whole fight.”

According to Boston25, bluefin tuna sells for $6-$12 per pound. Devins isn’t sure how much she made from her catch, but she assured the news station that it was going straight to her college fund.

? WOAH! It took this Hamilton teen 10 hours to reel in the 700-pound catch and she plans on using the money to help pay for college. boston25.com/2Y3dDW9