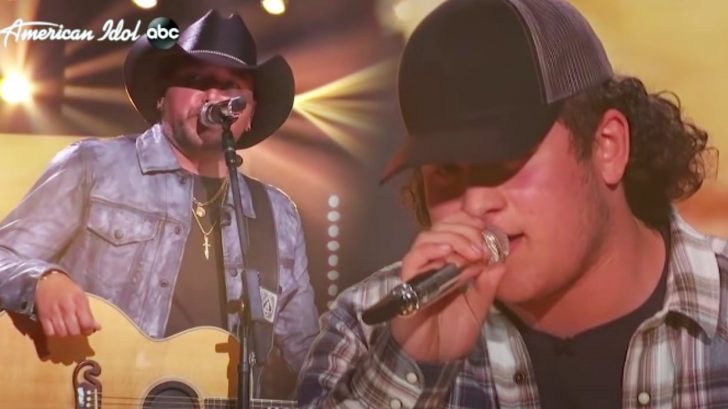 16-year-old country singer Caleb Kennedy stood out from the start of American Idol‘s 2021 season. After wowing the judges with a performance of an original song during the auditions, Kennedy was given a golden ticket to Hollywood. From there, he advanced in the competition to become one of the Top 24 contestants.

Kennedy and the other lucky members of the Top 24 got the chance to perform duets with some of music’s biggest stars. Just a few of the artists who joined the Idol contestants on stage were Katharine McPhee, Jimmie Allen, Josh Groban, and Jason Aldean.

Aldean was the artist who performed with Kennedy. But before their duet, Kennedy delivered a solo performance of The Allman Brothers Band’s “Midnight Rider.”

After his solo performance, Kennedy united with Aldean to sing his #1 song from 2012, “Fly Over States.” The duet pushed Kennedy out of his comfort zone, since he didn’t play his guitar during the performance.

In a behind-the-scenes chat before they performed their duet for the judges, Aldean tried to calm Kennedy’s nerves. “I think this will be good, man,” he said.

Aldean was right, because their performance ended up impressing all three of the judges!

After the duet, the judges commented on both Kennedy’s solo performance and his duet with Aldean. Luke Bryan told Kennedy he loves how he has his own unique sound, no matter what he sings, saying “You sound like you.”

Lionel Richie complimented Kennedy for sounding experienced beyond his years, saying, “You have been possessed by a very old, seasoned countryman.”

If you missed Kennedy’s performances and want to understand where Richie is coming from, check out the video below. It contains his cover of “Midnight Rider,” his behind-the-scenes chat with Aldean, their “Fly Over States” duet, and the judges’ comments.

There’s no denying the fact that Kennedy is country to the core!