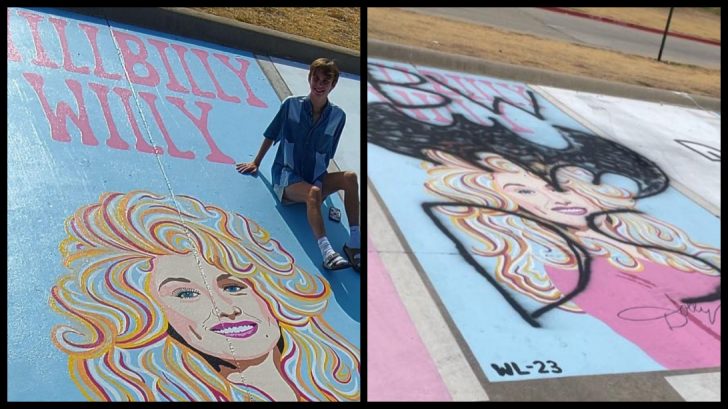 WiIll Lepard, a high school senior and avid fan of Dolly Parton, is trying to follow his idol’s example after his senior parking spot was vandalized.

Lepard, a student at Aledo High School in Texas, spent a week-and-a-half painting a Dolly Parton-themed mural in his parking spot. The 18-year-old used 14 cans of paint, spent more than $300 for supplies and often painted until 2 a.m. after getting off of work to complete the larger than life tribute to Dolly.

But, a few days after he completed his masterpiece, someone vandalized the painting by using black paint to cover Dolly’s face with a Batman logo and two sets of initials.

Lepard’s aunt posted about the vandalism on Facebook and it didn’t take long for the teen to get an outpouring of support from his local community and readers from all over the country who wanted to help.

One woman went to Lowe’s to buy the teen the supplies he needed to repaint the mural. When she checked out, Lowe’s only charged her half-price because they had seen the viral post and wanted to help Lepard.

According to Lepard’s mom, Molley Michel, Will has been a fan of Dolly Parton for years and started collecting her memorabilia when he was a freshman in high school. He covered one of his bedroom walls with records, t-shirts and other Dolly items. But, he’s also a huge fan of her music and says he is inspired by the joy she radiates.

“No matter how mean or rude someone might be,” Lepard said. “Parton responds with positivity.”

Will is trying to channel is inner Dolly and respond to the vandalism in the same spirit she would.

“I’m not mad. Obviously, this is a horrible thing to do to somebody,” he said. “But at the same time, as long as I know I’ve got my friends and family, that’s all that really matters. I’m still going to try to be nice to people.”

Lepard is determined to recreate his Dolly Parton parking space mural, but do it better than before.

“It’s the one thing I set is to do it alone and prove it to myself,” he said. “And if I can do it once, I can do again — better than before.”

See step-by-step photos of Will Lepard’s impressive Dolly mural in the post below.