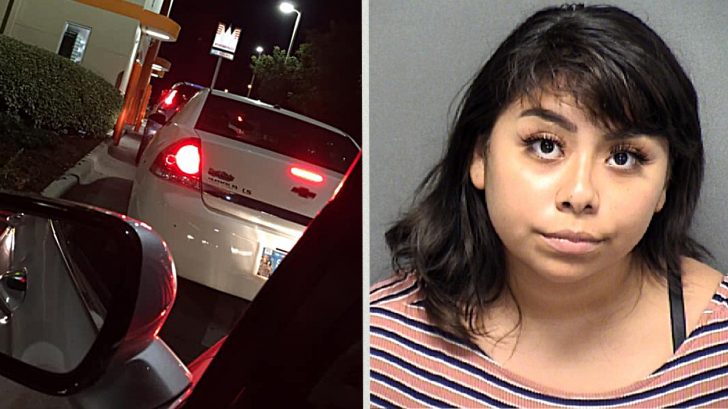 In San Antonio, Texas, a 62-year-old woman was patiently waiting in the drive-thru line of Whataburger when 19-year-old Andrea Santarelly tried to cut line to get in front of her. When the woman didn’t let the teen in, Andrea intentionally damaged the woman’s vehicle.

Only in Texas : Whataburger allows horses in the parking lot and drive-thru.

It happened at the Whataburger on 12510 SW Loop 410, on April 15th, 2020. The woman said she was in line with three cars ahead of her when a white Nissan pulled up and tried to cut everybody in line.

Each car stopped the teenager from cutting, which angered her, but by the time she got to the woman’s car, the teen decided to force her way into the drive-thru. She smashed her Nissan into the front left panel of the lady’s car. After that, Andrea allegedly got out of her car and started banging on the lady’s window and screaming at her.

“You hit my car!” she said as she walked back to her car then walked back over with a belt buckle to add, “All for Whataburger! Well I’m gonna return the favor!” FOX San Antonio reported.

The 19-year-old reportedly scraped the lady’s car from the roof to the back. At that moment, the woman pulled out of the Whataburger line and called the police. Andrea left before the authorities arrived and so the woman filed a police report, giving the officer the teen’s license plate number and description of her.

?MUGSHOT? Andrea Santarelly, 19, has been arrested after police say she became angry at a Whataburger drive-thru and damaged another car after saying the driver let her in the line. STORY: bit.ly/3dB3MKz

The police quickly found Andrea and asked her about what happened. She said she thought there were two lanes at the drive-thru and she was supposed to merge into the main lane.

She admitted to making contact with the lady’s car and during a moment of anger using her belt buckle to scratch the lady’s vehicle. Andrea was reportedly charged with Criminal Mischief, which is a misdemeanor, and ordered to pay $2,067.75.