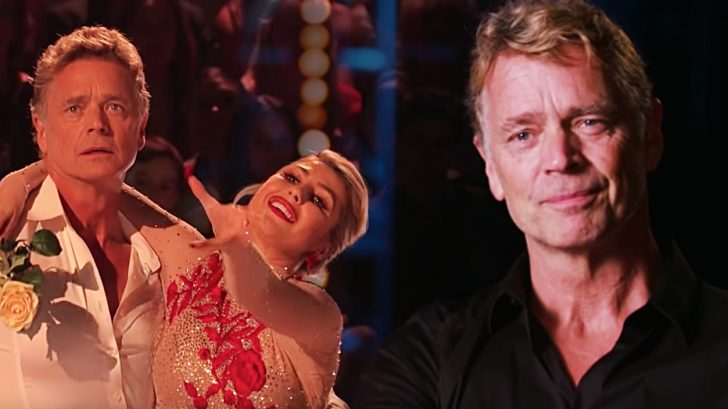 Just moments before he hit the ballroom floor with his pro partner, Emma Slater, country music singer and Dukes of Hazzard star, John Schneider had tears roll down his cheek as he emotionally recalled the pain of losing his mother just a few short years ago.

Appearing in the 27th season of Dancing With The Stars, Schneider and Slater have had quite a few notable moments and stunning performances over the last few weeks – and this one became a truly impactful moment for him.

In the pre-dance interview segment, Schneider opens up about one of the hardest years he’s ever experienced: 2016. During that time, terrible flooding overtook his land in Louisiana where both he has a home, his mother had a home, and his film production studio business is located.

“2016 is the year that I lost everything,” he told Slater. “We had what you can only call the ‘perfect storm.”

He broke down in tears telling the story – and again reliving the moment sitting next to Slater for the pre-dance interview. “I wish my mom could be here, I wish she could be sitting in the audience watching.”

Is there anything wrong with FEELING in the moment and dancing with abandon?

Performing a waltz to a song called “Smile,” Slater told him that she wanted this dance to be a tribute to his mother in her honor – and as such, Slater would incorporate his mother’s favorite flower, a yellow rose, into the performance and at the end Schneider would rise up again and smile.

True to her word, Slater put together a beautifully-choreographed dance with Schneider that not only had incredibly powerful music, but ended in a touching tribute to his mom and her memory.

@John_Schneider your waltz was beautiful tonight!! So heartfelt, I don't know how you did it with that video before. As always, all of my votes went to you and Emma!! Keep smiling, your smile is beautiful and so is yours! Love you so much!!!! #TeamSuperDuke #DWTS

Listen to John Schneider tell his story below and watch as he and Emma Slater waltz to honor his late mother in one of the most emotional episodes of Dancing With The Stars this season!

Share your thoughts about their performance in the comments below!