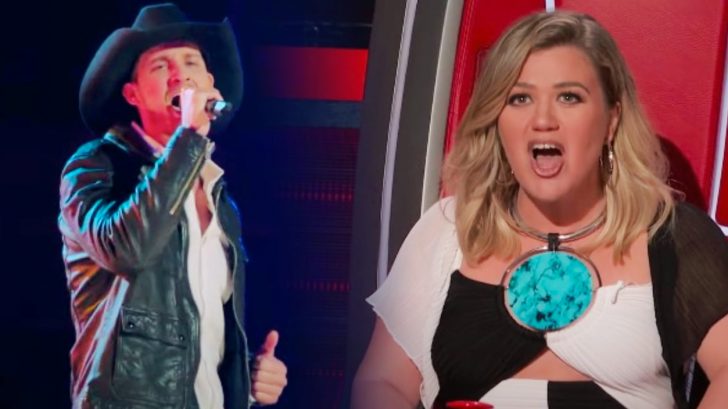 Tanner Gomes is surely feeling “Real Good” after winning his knockout on The Voice!

The Team Kelly artist competed against Marisa Corvo, who sang Cher’s “If I Could Turn Back Time.” As for Gomez, he covered Tim McGraw‘s #1 hit from 2003, “Real Good Man.”

Gomes put on one entertaining performance, and fully got into character.

His coach Kelly Clarkson was clearly impressed, and could be seen smiling the entire time he sang. She even stood up for him mid-performance! (And of course, gave him a standing ovation at the end as well).

“Man, you did some stuff there at the end that was really impressive man. I can’ tbelieve you didn’t blow your own hat off,” Blake Shelton said after the knockout ended.

John Legend praised Gomes for showing off a new side of himself as a performer, while Gwen Stefani noted his undeniable “cowboy swag.”

As you could already tell from how she acted during his performance, Clarkson was a big fan of what she heard and saw from Gomes. Still, she said it was “horrible” for her to have to choose between him and Corvo.

But in the end, she picked Gomes as the winner of the knockout!

“I ended up going with Tanner, because Tanner has really shown me different sides. He’s showing like this kind of charisma,” Clarkson said when explaining why she chose Gomes as the winner.

Tune in to Corvo and Gomes’ knockout performances below and let us know if you think Clarkson made the right choice.