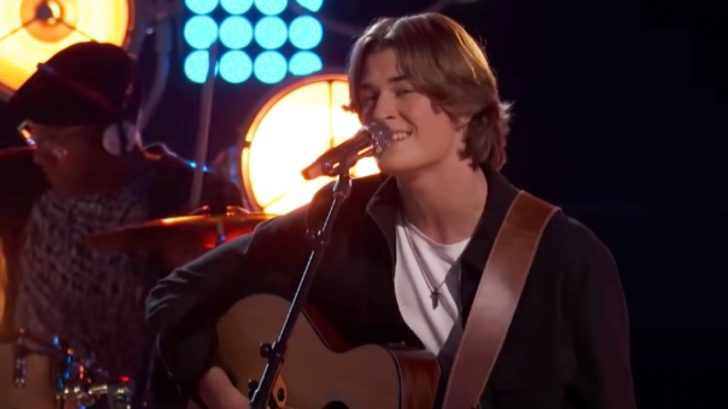 Voice fans had the power to pick songs for the Top 10 contestants of Season 22. When it came time to choose a song for Team Blake’s Brayden Lape, viewers landed on Kane Brown‘s #1 hit, “Homesick.”

Brown released “Homesick” in 2019 as the third single off of his album Experiment. The song reached the #1 spot on the Country Airplay chart and claimed the 35th slot on the all-genre Billboard Hot 100. It has since been certified 2× Platinum by the RIAA.

Voice fans were right to chose the song for 16-year-old Lape. In rehearsals, he explained how he was able to relate to the song:

“This is a song I can kind of relate to, being out here all this time and missing home. This is a perfect song because I’m definitely missing my friends. Missing my family. I’m sixteen and this is like, the longest I’ve been away from home.”

Lape brought that emotion to his performance of “Homesick,” which wowed all of the coaches. Camila Cabello said, “You just glided right over that. I mean, that’s probably my favorite performance of yours.”

He also earned praise from Gwen Stefani, who said, “That chorus fit you like a glove. I can picture you outside of this show doing a song like that and just being number one on the radio.”

Lape’s coach, Blake Shelton, complimented how much Lape has grown as an artist during his time on The Voice:

“It is literally watching you developing vocally and artistically in front of our eyes. As you start to get confidence, you’re gonna be way too big for us to ever get to come back on this show. I’m so happy for you and Gwen said it last week, you could almost come out here and not do anything and people still love you. But, you combine a great performance like that with the ‘it’ thing that you already have, the world is yours.”

Head below to watch Lape’s cover of “Homesick.”

Now it’s up to the viewers to determine what they thought of Lape’s performance. If he earns enough votes, he’ll secure a coveted spot in the Voice semi-finals.