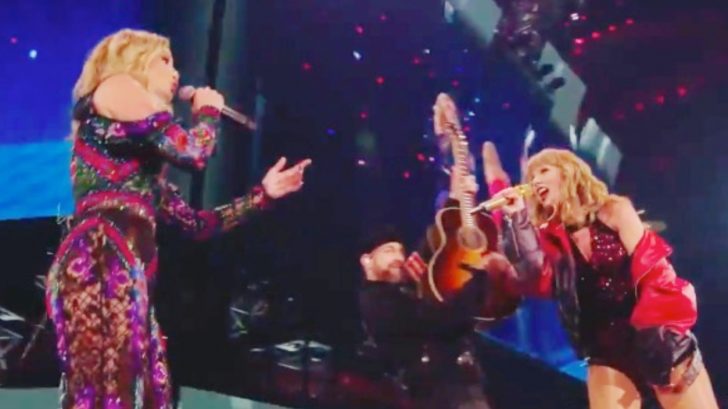 Taylor Swift closed out the U.S. run of her widely successful Reputation Tour in the most epic way imaginable. And it all involved a collaboration with one of country music’s hottest duos.

Long before she was the pop superstar she is today, Swift was country music’s sweetheart. Several of her fellow artists helped her along the way, including Jennifer Nettles and Kristian Bush of the award-winning duo, Sugarland.

As Nettles explained in an interview with Billboard, they came on to the scene around the same time that Swift did. Because of this, they all grew together as artists and maintained a good connection.

“Taylor is a fan and we’ve been a fan of hers,” Nettles said. “We both started out around similar times and had played some shows together. Of course she was like 15 or 16.”

Years later, as Sugarland was gearing up to release a new album following a long hiatus, Nattles said that Swift got in touch with them and wondered if they’d be willing to record a song she wrote.

“When she heard we were getting back together, she was excited and reached out and said, ‘Hey, I have a song, would you please record it?’ And we were like, ‘Yeah!‘” Nettles recalled.

That song turned out to be “Babe,” which Swift co-wrote with Patrick Monahan of the band Train. Swift is also a featured vocalist on Sugarland’s final cut of the song, and appears in its CMA-nominated music video.

While both Swift and Sugarland have performed “Babe” live before, they have never done so together. Well at least, not until recently.

Performing in Texas for the final night of her Reputation Tour‘s U.S. run, Swift surprised the unsuspecting crowd with something they had never heard before. Much to everyone’s delight, Sugarland strolled out on stage to join Swift in singing “Babe” live for the first time together.

The historical occasion was marked with identical videos shared by both Sugarland and Swift, which show just how hyped the crowd was to finally hear their famous collaboration live. The energy was through the roof in that place!

If you weren’t one of the lucky people in the audience that night, no need to worry. You can watch a snippet of the trio’s first-ever live performance of “Babe” in the clip below.

Hopefully this won’t be the only time that we’ll ever see Sugarland and Swift sing this together live!

Performing "Babe" live for the first time last night with Taylor Swift? Yes please!!! ?Thank you Taylor and congrats to you on being the first to play back to back nights at AT&T Stadium!