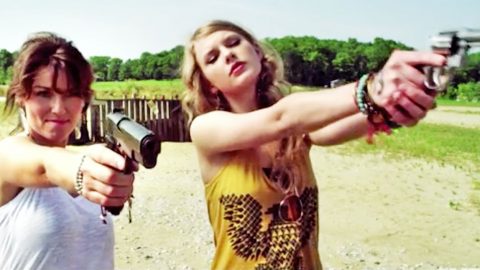 Shania Twain and Taylor Swift went on a Thelma & Louise-style rampage at the 2011 CMT Music Awards in a hysterical opening segment. Complete with dueling pistols and a blue vintage convertible, the two superstars sparked a war against the country music men of Nashville after Swift’s unnamed romantic male partner breaks her heart.

Twain takes on the role of Louise picking up Thelma (Swift) after an argument with the aforementioned boyfriend and drives her strait to the shooting range. After teaching Swift how to properly aim and shoot a pistol, a man approaches the two armed friends, saying he’d “like to squeeze [their] little hind ends.” Twain and Swift respond to his advance with bullets from their loaded guns.

Their exploits quickly make national news, with Donald Trump even weighing in on the matter. They cross paths with Kenny Rogers, Chord Overstreet (son of songwriter Paul Overstreet), and a hitch-hiking Kid Rock who they inevitably drive off a cliff after he dares to change the radio station from country.

Thelma & Louise was a 1991 hit film starring Geena Davis and Susan Sarandon in the roles of two best friends on the run from the law. Watch the hilarious parody in the video below and be sure to let us know what you think in the comments!