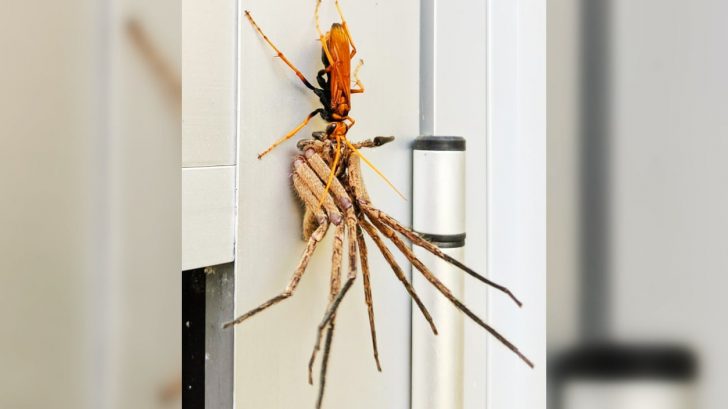 Whether you wanted to or not, you’ve surely seen the photos of giant spiders carrying away rodents for a feast. These creepy crawlies are called huntsman spiders.

In early 2019, a story about one huntsman spider went viral. It happened while a couple was vacationing in Tasmania, which is an island off the coast of mainland Australia

The pair was horrified to discover a huntsman spider had made itself at home in their hotel room. But what made the encounter all the more terrifying was the fact that the spider was in the process of eating a pygmy possum.

They filmed the spider in the act, and you can catch that footage in the following clip.

After watching that, we’re sure you can understand why the couple was so terrified when they discovered the huntsman spider in their hotel room.

So what if we told you there’s another critter out there that can capture and kill a huntsman spider? That’s a scary thought, isn’t it?

Well it’s not just a thought, but a reality.

Reddit user u/space_monster posted a few photos that show a huntsman spider in Australia being carried away by another massive creature…a tarantula hawk wasp.

Thousands of users responded to the now-viral photos, with one person writing, “Best part about this post? We all knew it was Australia without reading the description.”

See those pictures in the tweets below.

According to the National Park Service, the wasps are actually nectarivores, meaning they feed on nectar. But they are called “tarantula” hawk wasps because the female wasps will kill tarantulas and other large spiders to serve as “hosts” for their eggs and larvae.

“An adult female will paralyze a tarantula with its stinger, and then transport the spider back to the hawk’s nest,” reads the NPS website. “Once there, the female lays an egg in the spider’s abdomen, then covers the entrance of the burrow to trap the spider.”

Speaking of the wasp’s sting, it’s a powerful thing. The NPS says “Roadrunners are one of the few animals that will risk being stung to feed on tarantula hawks,” and for good reason. The wasps are known for having one of the most painful stings in insect world.

Entomologist Justin Schmidt created the “Schmidt sting pain index,” which is used to rank the pain of insect stings on a scale of one to four. He ranks the hawk wasp’s sting at a “four” on the scale.

Schmidt wrote a paper about the insects, and described another scientist’s response to being stung:

“Undeterred after the first sting, he continued, receiving several more stings, until the pain was so great he lost all of them and crawled into a ditch and just bawled his eyes out.“

In other words, the huntsman spider captured by the hawk wasp in Australia was certainly in a lot of pain before it was left paralyzed by its sting.

You can learn more about hawk wasps and their painful stings by tuning in to the video below. After watching the clip, you’ll find yourself praying that you’ll never make a hawk wasp angry!