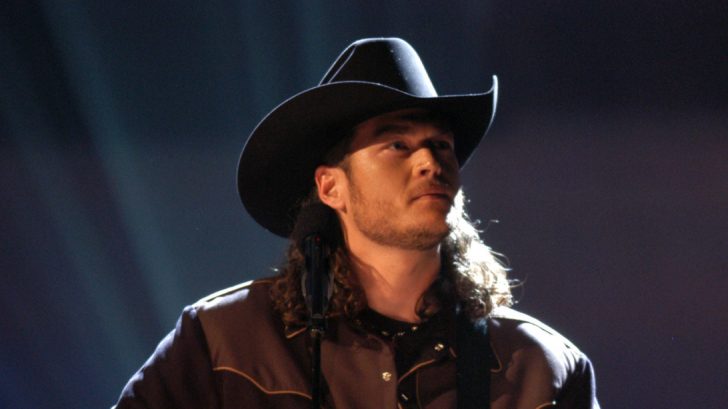 2001 was a banner year for Blake Shelton. It was the year he signed with Giant Records and released his debut single, “Austin.” The song would go on to be his first chart-topping hit and would launch his country music career.

Early that year, before Shelton would become a household name, a television station from his home state of Oklahoma sent a television crew to follow the up-and-coming star as he toured the state. For more than a decade the footage was lost in the tv station archives, but was discovered and released in 2013. The priceless footage captured various behind-the-scenes moments with the Ada, Oklahoma, native that are sure to delight any Blake Shelton fan.

As the clip begins, a tired mullet-laden Blake is seen helping his crew set up for a concert. He tells the reporter that his record label hates his hair and has strongly been encouraging him to cut it.

“You’ve got to cut your hair. People are going to make fun of you and laugh at you. That’s so out of style. And you know me, being myself. ‘Screw ’em, you know. Guess what I just gave you a number one hit,” Blake says about his hair. It was roughly five years later before Blake would cut off his infamous mullet.

Even though Shelton had produced a number one song, he was acutely aware that there may never be more and he was simply hoping that he might end up with a Gold record.

“That’s probably going to be the most satisfying thing to me; to get a gold record. We’re just waiting for the phone call at this point,” Blake said.

Shelton’s wish was granted as his debut album went gold, and it kept on climbing until it reached platinum status with more than 1 million albums sold. The success was just the beginning for Blake as he went on to earn five more platinum certifications and become one of the most successful men in country music.

A lot has changed for Blake Shelton since the lost-now-found tapes were recorded in 2001, but some things most definitely have not changed. Blake’s no-nonsense attitude and his incredible sense of humor have been there from day one and are just some of the qualities that have endeared him to fans over the course of his career.

Y’all! How does a show in Fort Smith, Arkansas sound!? How about tonight!? Because it is happening! See you at The Sound Room tonight at 8pm! It’s a free show with limited space so first come, first serve!

Watch the priceless 2001 interviews with Blake Shelton in the video below.