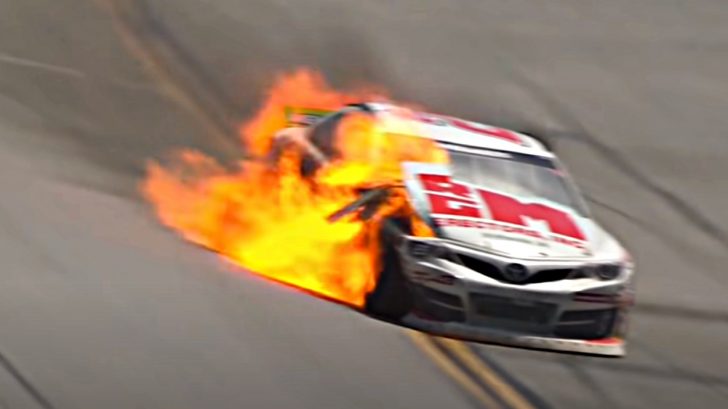 A fiery crash left this 48-year-old ARCA driver in critical condition at a hospital after suffering significant burn injuries, his wife told a local news outlet.

Derrick Lancaster was competing in Saturday’s ARCA race at the Talladega Superspeedway when, during the final five laps, Drew Dollar made contact with his car and Lancaster’s car then caught fire as it sped down the track.

A few of my pictures of Derrick Lancaster in his @ARCA_Racing cars @Daytona in 2016, 2017, 2019, & 2021. Thinking about him and his family tonight. Praying for a swift and complete recovery. #ARCA pic.twitter.com/NlkIZtVtpk

The ARCA series is a feeder league into NASCAR and many drivers make their name in the smaller league. Lancaster has been competing in the ARCA series since his 2014 debut.

His wife, Elizabeth Nunley Lancaster, shared an update to her Facebook page saying that he had suffered a series of injuries including second and third-degree burns to his arms, neck, and face, but had not suffered any broken bones or internal injuries.

A second update on Derrick Lancaster from his wife: pic.twitter.com/S1pyP59Hqk

Lancaster is on a ventilator as doctors are assessing lung damage and pull the soot from his lungs which he inhaled during the fire. This is the second major injury Lancaster has sustained recently following his August 2020 skull fracture during an accident at Kingsport Speedway.

Our thoughts and prayers are with Derrick.

See the full video from the race on Saturday below.