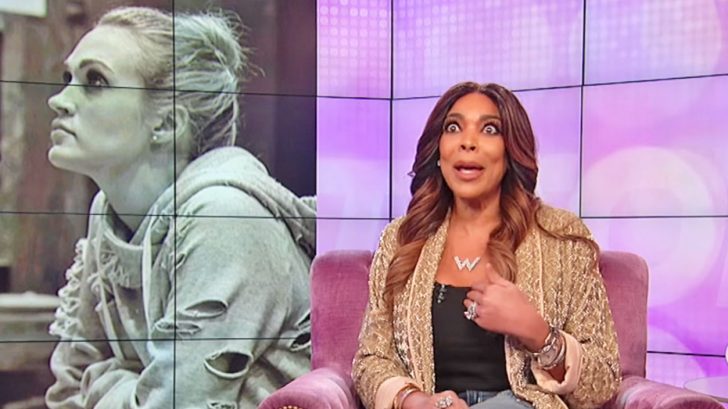 Back in January, talk show host Wendy Williams criticized Carrie Underwood for staying out of the spotlight since her fall in early November 2017. Along with breaking her wrist and requiring surgery, she also revealed that she “somehow managed to injure” her face also.

“I’ll spare you the gruesome details, but when I came out of surgery the night of my fall, the doctor told [husband] Mike that he had put between 40-50 stitches in…I want you all to understand why I might look a bit different,” she wrote in a note to her fans around the new year.

While many fans loved that Underwood was opening up and telling them why she had been absent, Williams thought there may be another reason she hasn’t shown her face since co-hosting the CMA Awards on November 8.

“Did you hear about [Carrie Underwood]?” Williams asked her audience. “I really don’t know a whole bunch about it, but she allegedly fell down a bunch of steps at her house, broke her wrist. She released on Twitter that we may not recognize her when it’s all said and done. I don’t know what that means… an excuse for a face lift,” she said.

Underwood’s fans did not take Williams’ accusation lightly, and took to Twitter to air their grievances.
Check out their tweets here.

If you thought this was the end of Williams criticizing the multi-platinum-selling country singer, you thought wrong. During the April 5 taping of The Wendy Williams Show, the talk show host brought up Underwood – again!

On April 4, Underwood shared a black and white photo of herself in the studio, but you could only see half of her face, which Williams apparently did not like.

“She’s still hiding her face,” Williams said with attitude. “Dang it! That accident where she fell down the concrete steps of her home … that happened back in November.”

Williams sort of took back her plastic surgery accusation by saying, “Apparently its not a facelift because this side of her face looks the same. I don’t know what’s on the right side but if its not a big scar, people might turn on you.”

To end her long rant about the “Cry Pretty” singer, Williams asked, “What’s over on that other side, Carrie Underwood? Show us.”

Little did she know, the day after Williams went on this rant, Underwood did post a photo with her whole face visible…during rehearsal with her band. See the photo below.

Turns out, Underwood was preparing for her just announced ACM Awards performance on Sunday (April 15), where she will be singing her brand-new single “Cry Pretty.”

What do you think of Williams’ strong opinions on Carrie Underwood? Watch her rant in the video below.