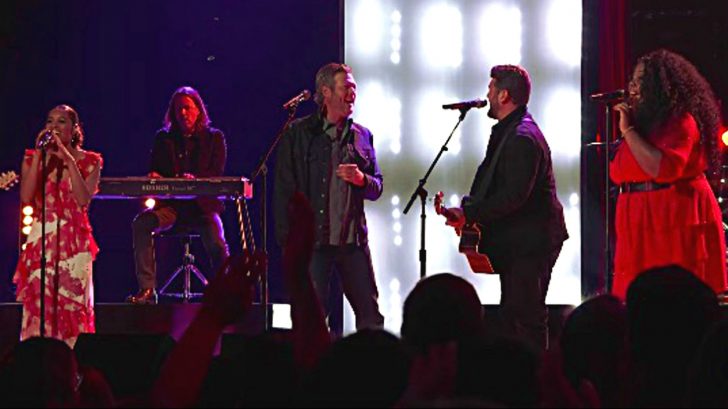 Team Blake Is Full Of Soul

Usually, Blake Shelton‘s team on The Voice is stacked with a host of country singers. But at this point in the competition, his team is more of a soulful bunch.

Shelton played on his team’s strengths as soulful singers when he brought them together for a collaborative performance on Tuesday night (April 24). Spensha Baker, Kyla Jade, and Pryor Baird all joined their coach to sing one of the most iconic hits in all of music history.

Titled “I Thank You,” the song was originally recorded by soul/R&B duo Sam & Dave and released in 1968. The song generated a closer connection to the country music community when it was covered by Southern rock group ZZ Top in 1980. Their version claimed the 34th spot on the Billboard Hot 100.

Since then, the song has been covered by other music greats such as Bonnie Raitt and Bon Jovi. Now, the members of Team Blake can add their names to the history books, as they also performed a killer version of the song.

While Shelton opened with a short solo, the whole performance was all about showcasing the talents of his team members. Everyone got equal opportunity to shine, with all three having multiple solo parts throughout the song.

But Baker and Baird also proved that they have what it takes to win the whole thing. All three team members have powerhouse voices and carry themselves onstage in a way that leaves you hooked as you watch them.

Of course, it was also just fun to watch the three contestants have a good time singing a classic hit with Shelton. The combined talents of coach and team members result in a performance that’s too good to miss.

Clearly, those who tuned in to The Voice wanted to hear more from Baker, Jade, and Baird, because all three are still standing in the competition!