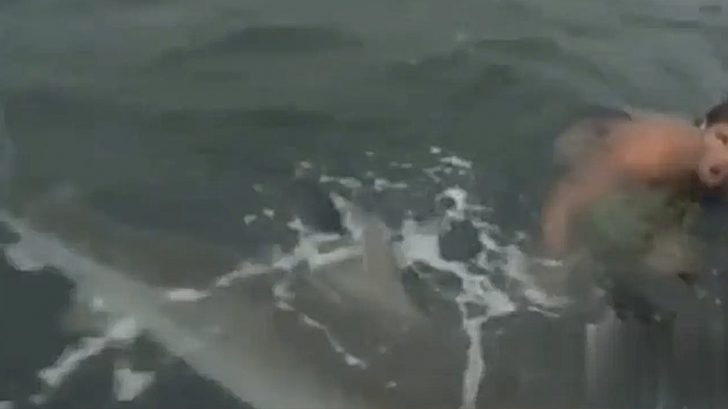 TikTok page Deep Blue shared a video of a man narrowly escaping a tiger shark in the waters of Snapper Rocks located near the Gold Coast of Australia.

Deep Blue wrote in the caption, “Escaped last time from shark attack. A diver suffering from a tiger shark attack, while trying to climb back into the boat.”

The video was taken by the swimmer’s friend who was standing on a boat. At the start of the video, the man in the water was swimming back to the boat with a small cage in his hand as they all laughed.

Then all of a sudden, the swimmer screams and places the cage down in the water right before a massive tiger shark came swimming up from the depths and slams right into him.

Fortunately, the man placed the cage in the right spot of the water and was successfully able to use it to block the shark from biting him. He narrowly escaped a shark attack by inches while his friends continued to laugh.

The man climbed back into the boat while one of his friends can be heard saying, “Are you f**king kidding me, mate.”

Since the video has been posted to TikTok it has been viewed more than 9.3 million times with thousands of comments from people who were shocked at how nonchalant the guys in the video were about the encounter.

“His mates laughing is soooo Aussie!” wrote one.

Another said, “Total bro friends!! Laughing and recording your demise!”

A third added, “I knew this was Australia without even reading the description.”

Another tagged their friend saying, “See sis this is why I’m terrified of the ocean.”

A fifth commented, “Tiger shark. Not sure anyone knows just how close that was to a really, really bad day.”

Watch The Footage Of The Shark Encounter Below

@xdeep_blue Escaped last time from shark attack. A diver suffering from a tiger shark attack, while trying to climb back into the boat. The scene unfolds in waters Snapper Rocks near the Gold Coast of Australia. #xtigershark? #xtigershark #xsharks ♬ Originalton – DEEP BLUE