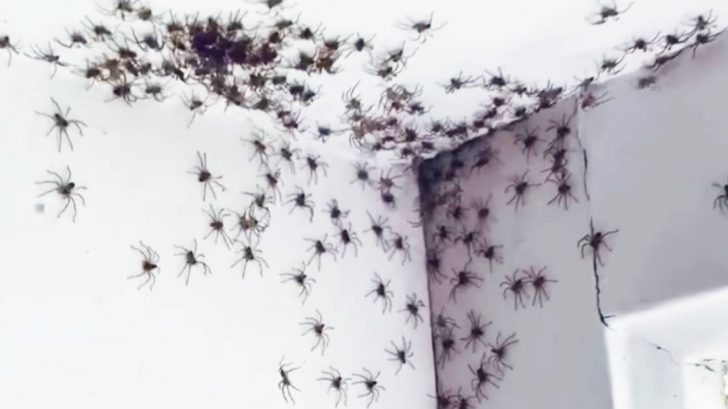 If spiders make you squeamish, this video is not for you.

A mother in Australia walked into her daughter’s room recently and found something she never expected to see – spiders. There weren’t just a few spiders, there were well over 50!

The video began with the camera pointed at the ceiling and wall, where you can see at least 30 spiders. Just when you thought it couldn’t get any worse, she pans over to the other side of the room, showing twice as many crawling all over the wall!

The woman’s friend took screenshots of the video and posted them to his Twitter page, where he said, “Gaaaahhhhhhhh, a friend of mine in Sydney just walked into her daughter’s room and found this.”

Gaaaahhhhhhhh, a friend of mine in Sydney just walked into her daughter's room and found this: pic.twitter.com/3UKMEHtGHt

His tweet went pretty viral and some people accused his friend of photoshopping the spiders on the wall. He disproved these theories by posting the woman’s original video. If you turn the volume up, the woman believes the spiders are baby huntsman, which was confirmed by The Sun.

Some Twitter users told the original poster to use a flamethrower or vacuum to get of the spiders. Even though huntsman spiders are low risk to humans, it doesn’t make it any less creepy! ABC News shared the video as well and asked, “Should we burn the house down?”

Watch the full video below. How would you react to seeing this in your home?