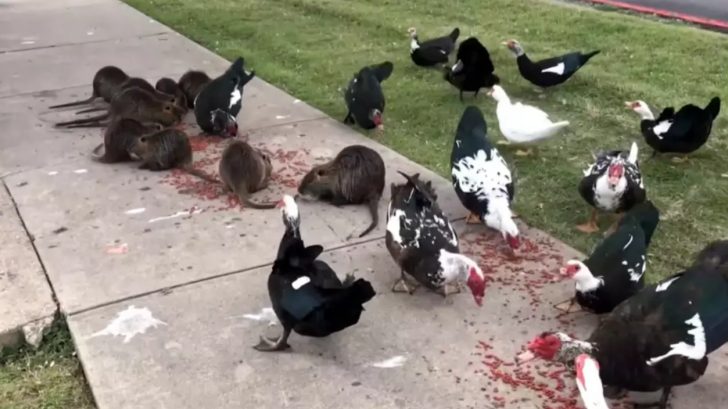 LAD Bible reported on Sunday, August 9, 2020, that “giant swamp rats” have invaded the Krauss Baker Park, in Fort Worth, Texas. A video posted on their website showed footage of a large number of the rodents gathered together eating cat food with the park ducks that someone had thrown to them.

Officials say they are concerned about the destruction these creatures can have on the region’s ecosystem if people continue to feed them and they overpopulate the area. People feeding them with good intentions may actually hurt the environment instead.

They are asking residents and visitors to not feed them.

These “giant swamp rats” are not rats but actually a small beaver called nutria. Nutria have large yellow beaver teeth with a rat-like tail. They build and live in burrows alongside stretches of water and normally feed on river plant stems.

They have made the pond at Krauss Baker Park their home and people passing by often throw food for them to eat. Officials are worried because a female can easily have up to 200 offspring in a single year.

Wildlife biologist for Texas Parks and Wildlife, Rachel Richter told WFAA, “If not controlled, you end up with erosion, destabilized banks, decreased water quality, and a lot less of a habitat for native plants, animals, and fish.”

Watch the video below showing the “giant swamp rats” and hear from wildlife biologist Rachel Richter herself.