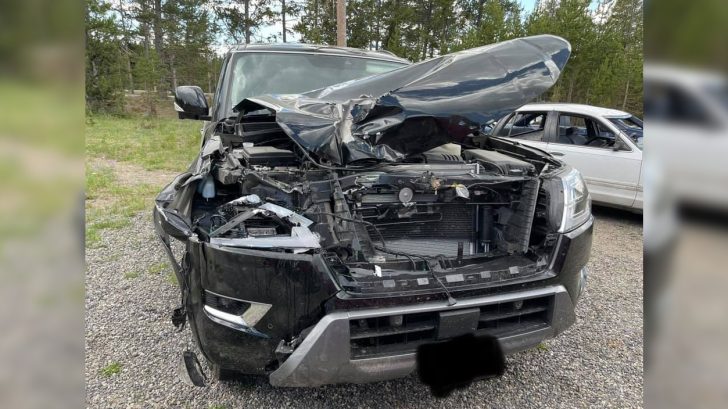 Facebook group Yellowstone Visitor shared a photo showing the aftermath of a truck that hit and killed a bison that was on the road during the night at Yellowstone National Park.

“This is why you don’t need to drive after dark,” Dianna Borgmier wrote on the Yellowstone Visitor Facebook page. “Bison hit, killed, I know of four bison in the last few days. Way too many! The road is theirs.”

Dianna said the incident happened at 10:30pm and the vehicle was towed to her husband’s tow and repair shop at the Fishing Bridge service area. She says he has a lot of pictures of bison hits from the past four years.

“There have been 241 known vehicle collisions with large mammals in the park over the last five years,” Morgan Warthin told For The Win Outdoors.

Yellowstone is the only location on the mainland of the United States where there are free-ranging bison populations since prehistoric times. As of 2021, there are over 4,500 bison roaming the park.

Wildlife officials say that bison are very easy to spot during the day but during the nighttime, everything changes. Oftentimes drivers do not see them until they are fully illuminated with vehicle lights and when driving too fast, a disaster can easily happen.

“Animal fur absorbs light, making them very difficult to see on roads at night even while using bright headlights,” the park said, according to For The Win Outdoors. “Slow down, especially on curves in the road, when venturing into the park during dark.”

The maximum legal speed limit in Yellowstone National Park is 45mph and bison can weigh up to 2,000 pounds. Even though they are the heaviest land animals in North America, they are still no match for an SUV weighing 5,000 pounds and traveling at high speeds.