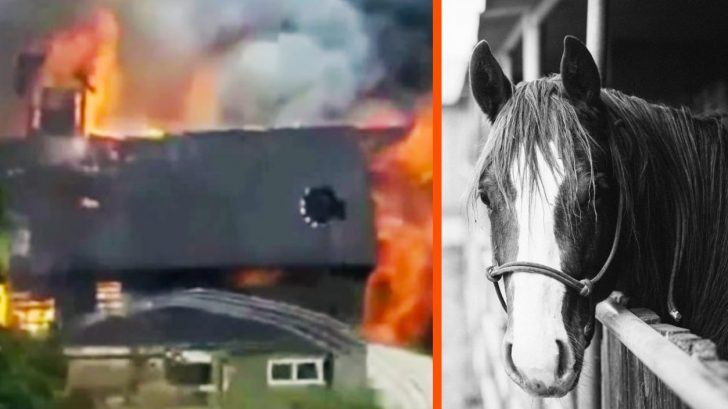 Around 2PM on August 30, a fire broke out in a barn on the County Seat Horse Farm in Milford Township, Pennsylvania. Only two horses made it out of the barn alive, while 11 horses perished in the fire.

One of the surviving horses was left with third-degree burns, but has since returned home and is reportedly doing well.

“They were my babies. I bred them. I raised them, and I buried them,” Madeline Ribacka told WNEP ABC 16 News. Ribacka owned five of the horses killed in the fire, while the other six horses were boarders.

"They were my babies. I bred them. I raised them, and I buried them."
Eleven horses died in a barn fire in Pike County that is now being called suspicious.https://t.co/FPm5rxJeU0

According to WNEP ABC 16 News, a state police fire marshal has ruled the fire as “suspicious.” Even Ribacka says the whole ordeal “doesn’t make any sense.”

Eddie Ryman, who owns the farm, also spoke with WNEP ABC 16. He said that one of the suspicious things about the fire is the fact that the barn door was closed.

According to Ryman, he never keeps the barn door closed. Instead, he leaves it open so that the horses can “come and go as they please.”

Ryman told the news outlet that the door was open when he left the property around 11AM on the day of the fire. After the fire, he said multiple witnesses confirmed the door had been open when they drove by earlier in the day.

“I have 15 eyewitnesses that drove up through the course of the day that said, ‘Eddie, the horses were outside,” Ryman said. “They were in the field. The door was open.'”

Incredibly tragic and sad. Our prayers are with you and the innocent babies that lost their lives. May the person responsible for this tragedy be caught and charged. Simply horrific.

But when the fire broke out, the barn door was closed, trapping the horses inside. The assumption is that someone shut the door with the deliberate intention to harm the horses.

“Upon the fire, they were all in and the door shut. It’s just sickening,” Ryman said.

The barn that was destroyed by the fire was three stories tall. The farm dates back to the 1800s, and Ryman put in a year and a half of work to rehab the barn.

Ryman used his own money for the renovations, and does not have insurance to cover the loss from the fire.

A GoFundMe campaign was established as a relief fund to help Ryman in the aftermath of the fire. If you’d like to contribute to the fundraiser, you can do so by clicking here.

Our prayers go out to Ryman, Ribacka, and the other people who lost horses in the fire.