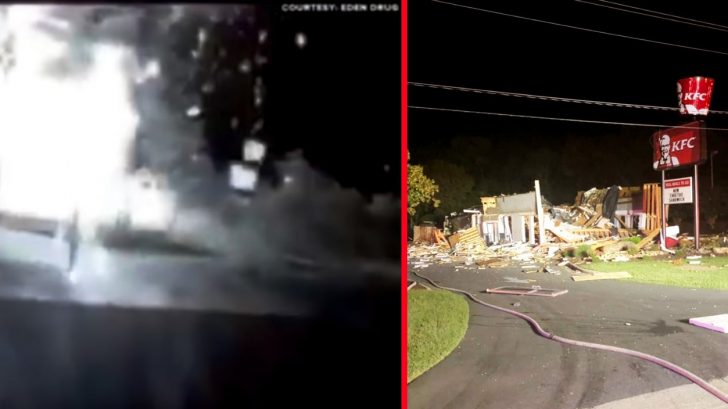 Around 12:40 AM on Thursday (July 11), police in Eden, North Carolina, responded to a call that the KFC restaurant in the city had exploded. When they arrived on the scene, they discovered that the building was in a state of absolute ruin.

The restaurant was reduced to rubble, with one of the four walls blown to smithereens. In fact, the only part of the restaurant that was left untouched was the tall KFC sign out front, which was advertising the restaurant’s new Cheeto chicken sandwich.

The Eden PD uploaded a photo of the damage caused by the explosion, which shows debris scattered throughout the parking lot and on the nearby highway. According to North Carolina news station WCNC, at least three nearby businesses also suffered damage as a result of the explosion.

Eden Fire and Eden PD are on scene on Highway 14 in Eden at Kentucky Fried Chicken due to an explosion. Officials are early in their investigation and there are no further details at this time.

Fortunately, no one was in the restaurant at the time.

Police are still trying to determine what led to the explosion, though there is a suspected cause. According to FOX 5 News, an employee told Eden police that he and the other employees believed they smelled gas when they were closing the restaurant on Wednesday night (July 10).

According to the publication, the manager allegedly tried to turn off the nozzle and also called the gas company. Although this information seems to indicate a gas-caused explosion, police say they still don’t know for certain what the the cause was.

If you think the pictures of the damage are horrifying, just wait until you see what we have to share with you below.

A surveillance camera from a nearby business captured the moment that the restaurant exploded, and the footage is terrifying to watch. The first few seconds of the video show complete peace, before a bright flash suddenly ignites the night sky.

After that, you see the restaurant blow into pieces…it seriously looks like something out of a movie.

Tune in to the video of the explosion below.

WFMY News 2 responded shortly after the explosion, and shared live footage from the scene. The station’s clip showcases just how extensive the damage was.

You can go ahead and check out that video below.