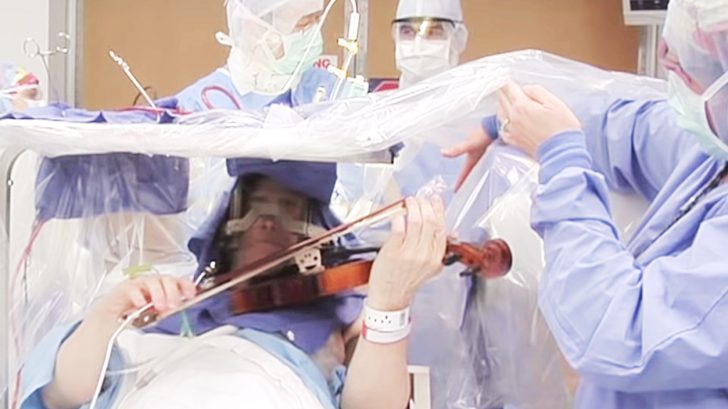 For centuries the medical field has been finding new and incredible ways to cure diseases and save lives. While surgeries and procedures can be risky, they can also be wildly successful. So when one man had to endure brain surgery while awake – doctors had just the idea.

Roger Frisch has been a master violinist for decades as he shared his talents with many. But one day in 2009, Frisch began to notice his playing was changing – just as he would pull the bow across the strings. Frisch explained to Mayo Clinic,

“When I would draw my bow, I suddenly had a shake in my bow.” He continues, “Now, for most other professions, this would not be a concern. For being a violinist where your career depends on the stability of your appendages, this was a great concern.”

Frisch shortly learned that he had essential tremor – a nervous system disorder that causes uncontrollable shaking.

Worried for the future of his career, he decided to seek out a medical professional and that’s when he met neurosurgeon, Kendall Lee. The specialist and Frisch both decided that deep brain stimulation surgery would be the best bet in solution to ending the tremor. This would require Lee to implant electrodes into Frisch’s brain – but there was one issue they ran into. The tremor in Frisch’s brain was too small for surgeons to figure out if the electrodes were helping.

Then, they had an idea. Frisch was going to have to play the violin wide awake during his brain surgery. This would be the first time this was ever performed during surgery.

This helped surgeons see if the electrodes were in the right spot and positively affecting the tremor. It was a perfect success!

Frisch was back to playing his violin the next day and back with his fellow orchestra colleagues just three weeks later.

Today, Frisch still serenades audiences on the world’s stage with his breathtaking talent.

You can watch Roger Frisch’s interview and partial surgery below.