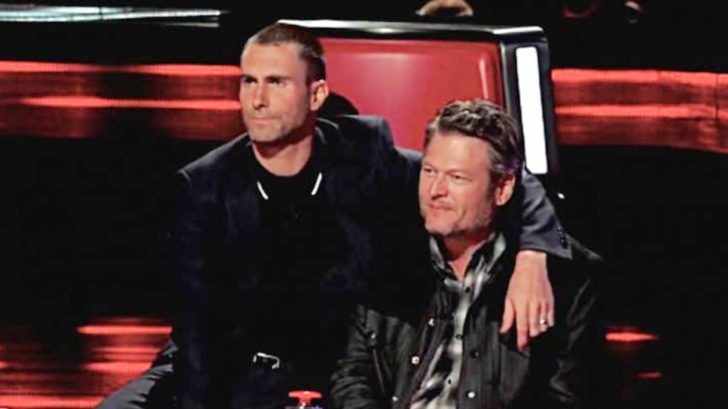 The Dynamic Voice Duo Is No More

While The Voice has made many changes over the course of its 16 seasons, two things have remained constant. And those two things have been coaches Blake Shelton and Adam Levine.

Other coaches have come and gone across seasons, but Shelton and Levine have been there for each and every one. The two quickly established a “frenemy” relationship, in which they could be seen fawning over one another one second and hurling insults at each other the next.

Their relationship resulted in some of the most hysterical moments to ever take place in Voice history.

But as much as they pretended to dislike each other, Shelton and Levine are true friends in real life.

So that’s why it surely came as a shock to Shelton when he learned that Levine chose to quit The Voice just days after the Season 16 finale aired.

The news was first announced to the public on Friday morning (May 24) by Voice host Carson Daly. During a segment on the TODAY Show, he revealed that Levine had made the choice to leave The Voice, and that former coach (and Shelton’s girlfriend) Gwen Stefani would be his replacement.

This news was made all the more shocking since just weeks ago, it was announced that Levine and the other coaches from Season 16 would all be returning to coach Season 17.

A group of Coaches so good we need an encore. ?✨

Based on the season that Levine had, it makes sense why he would want to leave the show now. He hasn’t won since Season 9, and stood no chance of winning in Season 16 after he was left without a team for multiple weeks.

Levine’s teamless state was the result of the new fan-voted live cross battles. At the end of it all, Levine only had a few team members left to carry through the competition, and they were quickly eliminated.

During an interview, Levine made his distaste for the cross battles crystal clear, saying “I hope they change it immediately, cause I think it sucks.”

Despite Levine’s obvious disappointment over how Season 16 turned out for him, fans were still shocked when his departure from the show was confirmed.

Even Shelton was stunned by the news.

Taking to Twitter, Shelton expressed how he too, had been blindsided by the news Levine was leaving The Voice. As he shared, he had only found out about Levine’s departure the day before, “and it hasn’t set in on me yet.”

In the opening to his tweet, Shelton summed up what many longtime Voice viewers are surely feeling right now. “Having a hard time wrapping my head around @adamlevine not being at @NBCTheVoice anymore,” he wrote.

Having a hard time wrapping my head around @adamlevine not being at @NBCTheVoice anymore. After 16 seasons that changed both of ours lives. I only found out about this yesterday and it hasn’t set in on me yet. Gonna miss working with that idiot.

Just as Shelton will miss working with Levine, we’ll miss watching the two of them interact with each other on The Voice. In honor of their friendship, enjoy a clip of some of their best moments together below.

The show will never be the same without Levine there to bicker back and forth with Shelton, that’s for sure.