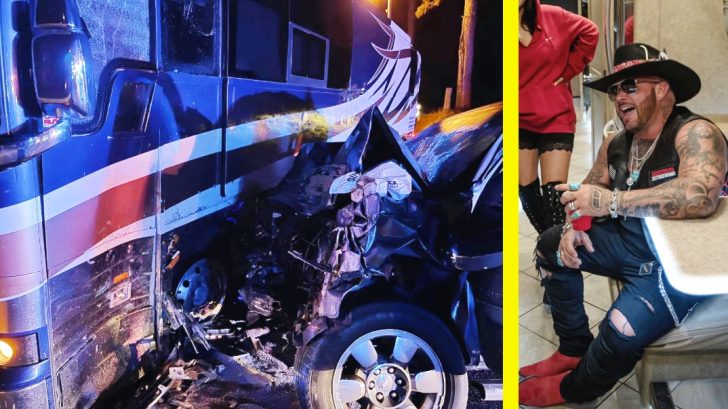 An early morning automobile accident left this singer without a functioning tour bus after being struck by a car.

Struggle Jennings, the grandson of Jessi Colter (and step-grandson of Waylon Jennings) is a country rap artist who has been honing his craft as a musician since the early 2010s.

While out on his Troubadour of Troubled Souls Tour, Jennings was headed to his next stop in Austin, Texas when his bus was t-boned by a car in an early morning accident.

In a post on his Facebook page, he says that everyone on the bus was safe, adding, “We ask for prayers and patience as we deal with the aftermath of this accident. Will return with updates as soon as we have them.”

Struggle’s cousin, Whey Jennings, commented on the photos and post of the crash, thanking God that everyone came out of it in one piece.

No details are available for the cause of the accident, but from the photos, it appears that the car struck the bus on the driver’s side.

Watch Struggle Jennings and his eldest daughter, Brianna Harness, sing “Have You Ever Seen The Rain?” below.