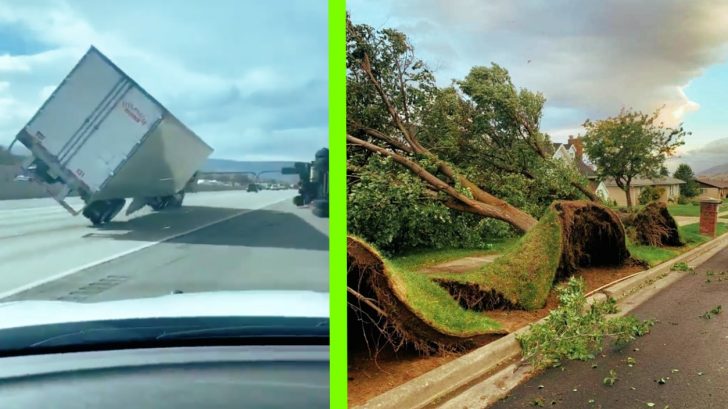 The National Weather Service (NWS) of Salt Lake City issued a warning after wind speeds reached up to 75mph. With the Arctic storm system rolling into Utah late Monday night, possible power outages and property damage were to be expected. Among the areas to be expected to be hit the worst was Davis County, Weber County, and other northern Salt Lake counties.

We have been mentioning the high winds and you may be familiar with the term "downslope winds". Attached our graphics where we expect the strongest winds to occur and an info graphic about downslope wind storms. pic.twitter.com/ZDXctlWuuT

On Tuesday night through Wednesday morning, the storm was very powerful. It hit Utah in several different places with record-low temperatures, extreme winds, and a hard freeze to farmer’s crops.

The wind reached up to 99mph in parts of Northern Utah, placing the storm at the same level as a category 2 hurricane (96-110 mph). The damage done by the storm caused a lot of issues in the state.

All schools in Salt Lake City were closed due to continued power outages.

We currently have power outages in more than half of our schools, and it may take up to two days to restore power to everyone. For that reason, we have made the tough decision to cancel school for tomorrow. We have posted more information at https://t.co/ieN9l8JiSa.#SLCSD #uted pic.twitter.com/zaZOIHCpSf

Several trees were uprooted and flipped over due to high winds.

Among power outages and trees being uprooted, semi-trucks were blown over on major highways. Within 24 hours of the storm, a video went viral showing proof of the damage and had gained more than 1,200 comments as of press time.

The eight-second video shared on Facebook Sept, 8th, 2020 shows the difficulty the semi-truck drivers were facing against the wind. The wind was so strong that two semi-trucks ended up flipping on their side and nearly hitting cars on the highway.

According to KUTV 2 News, 45 semi-trucks were blown over during the storm. High-profile vehicles are still restricted from I-15 in Davis County. Take a look at some footage of the trucks being blown over below.

INSANE VIDEO: This is one of 45 semis that blew over during hurricane-strength winds today. [Video: Utah Highway Patrol] High-profile vehicles are STILL RESTRICTED from I-15 in Davis County. More restrictions could happen tonight: https://bit.ly/33diF1N

Thank you to the people who are working to help restore and clean up the damage from this storm.

THANK YOU!Thank you to ALL of Lagoon’s incredibly dedicated employees for working tirelessly to clean up the damage on…