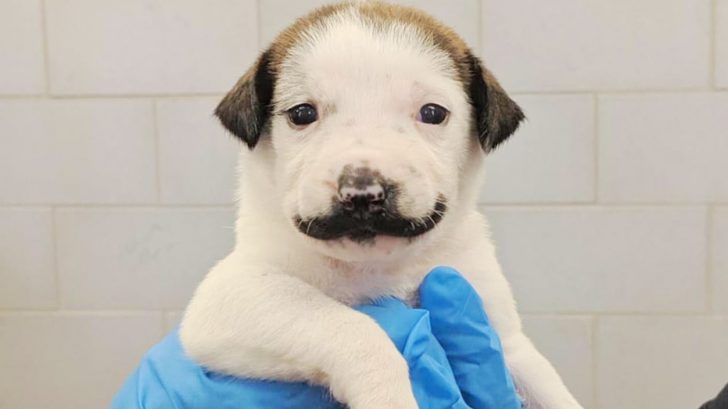 In July 2019, a stray German Shepherd mix arrived at Dallas Animal Services, but she wasn’t alone. The beautiful dog had 11 puppies with her, and one pup stood out in the bunch.

The reason why the puppy caught everyone’s attention is because of a pronounced mustache-like marking on her face. And it’s not a small marking either…it covers the whole length of her mouth!

#MustachePuppy has a name 〰️ meet Salvador Dolly! Wanna help us save more dogs like her? We need FOSTERS in both NYC and…

Because Dallas Animal Services deals with a lot of stray animals, it was decided that Mustache Puppy and her family should be moved out of the shelter and placed in a foster home. That’s when the Hearts & Bones Rescue stepped in.

They placed Mustache Puppy, her mama, and all ten of her siblings with a loving foster who cared for the family.

The rescue knew they had to give the uniquely marked puppy a name other than “Mustache Puppy,” and they finally came up with the perfect one. She is named Salvador Dolly, in reference to the famous mustached artist Salvador Dali.

They simply called her “Dolly” for short.

Allison Seelig from Hearts & Bones spoke to The Dodo about Dolly, saying that people can’t believe their eyes when they see her adorable mustache marking.

“The first thing people ask is generally, ‘Is that real?’ [There’s] a lot of ‘Omg stop it!’ and squealing over her,” Seelig said.

Photos and stories about Dolly have gone viral, and thousands of people have now fallen in love with the world-famous puppy. Especially after she appeared in the 2020 Puppy Bowl on Animal Planet!

Dolly ended up finding her forever home, and Hearts & Bones was happy to share an update on her in April 2020.

“Dolly has been loving life with her amazing dads, spending lots of time snuggling, playing and growing like crazy – she is HUGE now!” read the rescue’s post. They also shared a video of a now grown-up Dolly to show what she looks like, which you can watch here.

And if you’d like to donate to Hearts & Bones to help with their rescue efforts, you can do so by visiting the organization’s official website here.