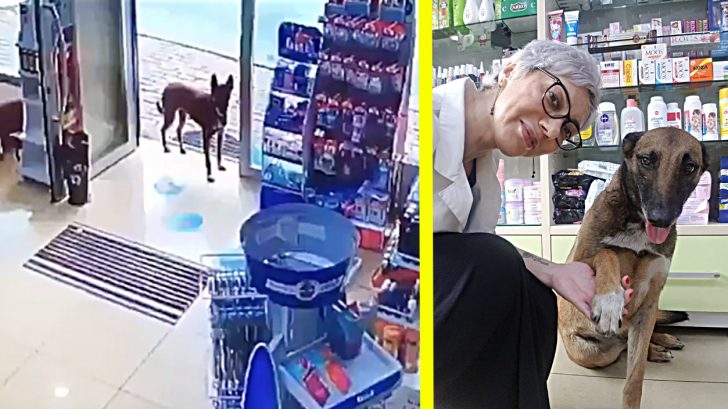 Banu Cengiz, a pharmacist from Turkey showed great compassion and the ability to understand what a dog was trying to tell her when it walked into her pharmacy with a hurt paw.

This happened back in June 2019 and the security footage from the pharmacy captured everything on film. Banu is well known in the community for helping stray dogs by putting bowls of food out and laying dog beds in front of her store for them.

Most dogs just lay on the beds and eat the food but on this particular day, one stray dog was standing at the front door staring at Banu as she was working.

The dog walked into the store and lifted up her paw to show Banu. At first, Banu thought the dog was just saying hello but when she kept holding her paw up Banu decided to take a look at it. Upon inspection, she noticed that the dog’s paw was bleeding from a small cut.

At this point, she realized the sweet dog was asking for help. Banu grabbed some antiseptic and cleaned her wound. The dog sat there like a good dog and received the treatment. After her paw stopped bleeding she gave the pup some antibiotics to further help the wound heal.

Banu then gave her some food and water and let her lay on a dog bed inside the store until the store closed. She said the dog laid down as if it was thanking her and saying that she trusted her.

“I do it because they feel. We need to help those who need it,” Banu told The Dodo. “People should teach their children to love and respect animals and nature. Then we can all live together in a beautiful world.”